Delta Air Lines, the designated Official Airline Partner of Chelsea Football Club, has launched an online campaign offering fans an opportunity to join the team’s pre-season tour around the U.S. this July-August. 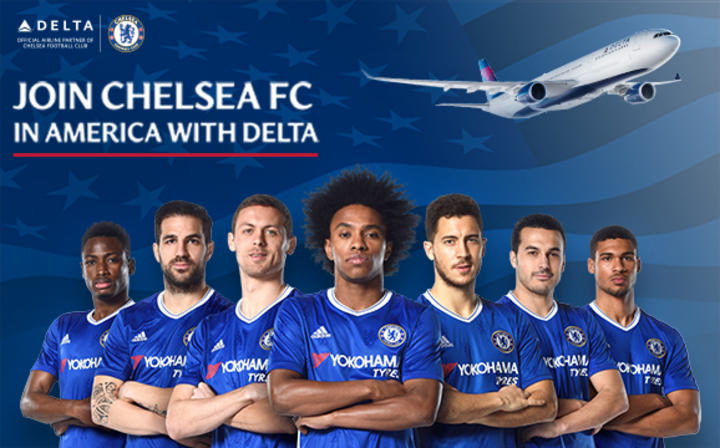 Delta is running the “Caption This Image” campaign through July 3, offering a Grand Prize winner a chance to watch the Chelsea vs. Liverpool match at Rose Bowl Stadium in Pasadena, Calif., on July 27. The prize includes two Main Cabin round trip tickets from Sydney/Hong Kong/Manila/Singapore to Los Angeles on Delta, three nights hotel accommodations and two tickets to the match.

In addition to the Grand Prize, five runner-up winners will each receive a Delta and Chelsea FC co-branded scarf and mini football. Terms and conditions are available at the promotion site: http://www.chelseafc.com/the-club/legal/terms-and-conditions/Delta_US_Caption_Campaign.html

To join the campaign, participants are required to visit the site (http://www.chelseafc.com/landing-pages/campaigns/delta-caption-campaign) and enter a caption for the picture that is shown on the page. One grand prize winner and five runner-up winners will be selected by a panel of judges based on creativity and originality (40 percent), content (40 percent) and overall appeal (20 percent).

Delta and Chelsea first joined forces in 2012 and since then have worked together to bring the airline’s 180 million annual passengers closer to the club. Delta will also be welcoming the Chelsea team as it tours the U.S. this summer, playing matches in Los Angeles, Detroit and Minneapolis, some of Delta’s major U.S. hubs and markets.