Delta Air Lines and Incheon International Airport Corporation (IIAC) are partnering to create a leading hub in Northeast Asia. The partnership agreement allows the two parties to exchange information regarding the design of Terminal 2 at the Incheon International Airport (ICN), collaborate on initiatives enhancing customer experience and operational performance, explore deployment of new technologies and jointly market and promote the ICN hub.

“This is our first partnership agreement with a foreign airline,” said Kwang Soo Lee, IIAC’s Executive Vice President. “This is a partnership for the future.  Working together with Delta, a leading global airline, we can achieve our mutual goal to develop a world-class hub airport.” 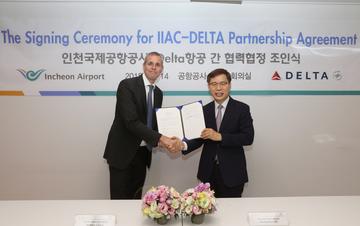 "We are excited about the new partnership with Incheon International Airport to build the most convenient hub in Asia, reducing connecting times and offering the best-in-class products at Incheon’s Terminal 2, with our joint venture partner Korean Air," said Matteo Curcio, Delta’s Vice President – Asia Pacific, based in Seoul. “I am confident that ICN will be the leading hub in Asia in offering the best transfer experience for customers from both sides of the Pacific.”

IIAC opened Terminal 2 on January 18, 2018, when Delta, its joint venture partner Korean Air, and Air France - KLM started operations. The 1,260,000 square-foot Terminal 2, designed to handle more than 18 million passengers per year, will be expanded as part of the airport’s fourth expansion phase by 2023.  Customers enjoy the most efficient and seamless connecting experience at the state-of-the-art facility, which includes four Korean Air lounges.

Delta has invested in airport projects since 2006, and along with its airport partners, Delta is involved in additional infrastructure projects in coming years, including improvements and new facilities at several of its key hubs in Atlanta, Los Angeles, New York, Salt Lake City, Seattle and Minneapolis.

With the goal of becoming the hub airport of Northeast Asia, Incheon International Airport has shown steady growth since its opening in 2001. In 2017, Incheon Airport ranked 7th amongst all airports in terms of international passengers and 3rd in international cargo.  Amid the rapid growth, more than 50,000 airport family members put safety and comfort of passengers before anything else, and we achieved the honor of being the best service airport in the world for 12 consecutive years.  Incheon Airport Passenger Terminal 2 opened its service to the world on January 18, 2018, offering more convenient facilities and services.

Delta Air Lines serves more than 180 million customers each year. In 2018, Delta was named to Fortune’s top 50 Most Admired Companies in addition to being named the most admired airline for the seventh time in eight years. Additionally, Delta has ranked No.1 in the Business Travel News Annual Airline survey for an unprecedented seven consecutive years. With an industry-leading global network, Delta and the Delta Connection carriers offer service to 324 destinations in 57 countries on six continents. Headquartered in Atlanta, Delta employs more than 80,000 employees worldwide and operates a mainline fleet of more than 800 aircraft. The airline is a founding member of the SkyTeam global alliance and participates in the industry’s leading transatlantic joint venture with Air France-KLM and Alitalia as well as a joint venture with Virgin Atlantic. Including its worldwide alliance partners, Delta offers customers more than 15,000 daily flights, with key hubs and markets including Amsterdam, Atlanta, Boston, Detroit, Los Angeles, Mexico City, Minneapolis/St. Paul, New York-JFK and LaGuardia, London-Heathrow, Paris-Charles de Gaulle, Salt Lake City, São Paulo, Seattle, Seoul, and Tokyo-Narita. Delta has invested billions of dollars in airport facilities, global products and services, and technology to enhance the customer experience in the air and on the ground. Additional information is available on the Delta News Hub, as well as delta.com, Twitter @DeltaNewsHub and Facebook.com/delta.