Delta pays $1.1 billion in profit sharing thanks to record year 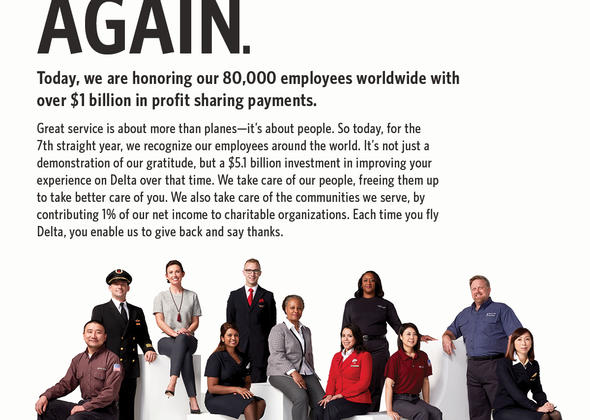 Delta on Feb. 14 will pay out more than $1 billion in profit sharing for the third year in a row and celebrate the outstanding accomplishments made possible by its more than 80,000 employees around the world. 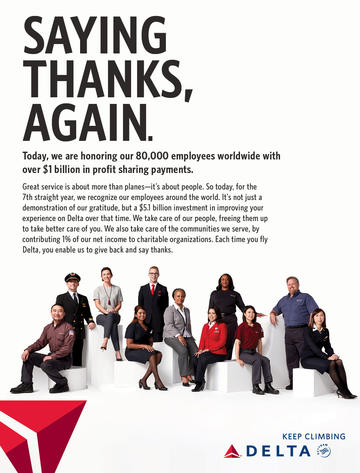 “No other company and certainly no other airline has ever shared $1 billion in profits with its employees,” said Delta’s Chief Executive Officer Ed Bastian. “We are so proud and excited to celebrate on Feb. 14 with all Delta people worldwide, who serve our customers and run the most reliable airline operation in the world.”

The airline has paid out nearly $5 billion through its profit sharing program over the past five years. Through the program, employees share in the success they create together through hard work and a focus on the customer.

Delta employees will be honored for their record-breaking performance on Feb. 14 at events held across its global network. The airline also will thank employees with ad placements in U.S. newspapers, including The New York Times, Los Angeles Times and The Atlanta Journal-Constitution, among others.

Delta’s profit sharing payouts will have an even bigger impact on local communities than the numbers suggest because of what economists call “the multiplier effect.”

For example, in metro Atlanta, where Delta will pay its more than 32,000 employees more than $392 million, the economic impact will actually be more than double: an estimated $957 million, according to a local economist.

In addition to profit sharing, Delta's Shared Rewards program pays out monthly bonuses for meeting corporate operational goals throughout the year. In 2016, Delta employees earned more than $90 million in Shared Rewards as the company achieved history-making operational and financial results.

Employees will also receive a 6 percent raise in base pay in April, resulting in a total pay rate increase of 25 percent in two years. 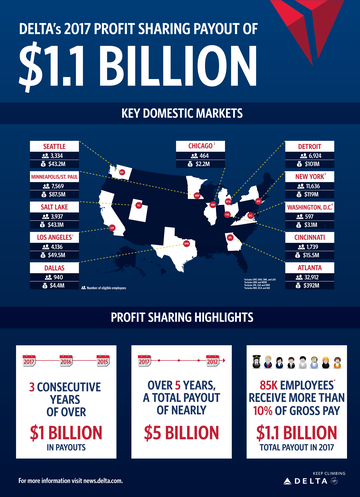