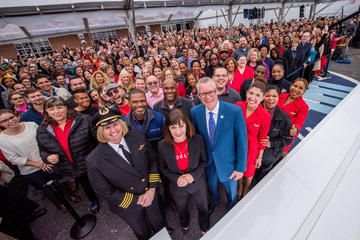 Delta Air Lines today will pay out more than $1 billion in profit sharing for the fourth year in a row and celebrate the outstanding accomplishments made possible by its more than 80,000 employees around the world.

Delta employees earned the $1.1 billion payout for their role in delivering record-breaking operational and customer satisfaction performance as well as strong financial performance.

“This is the fourth year in a row that Delta’s profit sharing has topped $1 billion — a milestone no company in history has ever achieved,” said Delta’s Chief Executive Officer Ed Bastian. “Delta people are the reason for our success and Valentine’s Day is our favorite day each year as we celebrate the incredible results our people have delivered.” 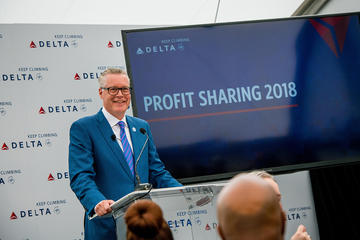 The airline has paid out more than $5 billion through its profit sharing program over the past five years. Through the program, employees share in the success they create together through hard work and a focus on the customer.

“Our industry-leading profit sharing and compensation philosophy reflects a decision we made a long time ago to share in the company’s success each year with our people who make it possible,” Bastian said. “Rather than make a one-off payment like other companies, Delta is invested in highly competitive base pay, an industry-leading annual profit sharing plan, and monthly bonuses each year when the airline performs well.” 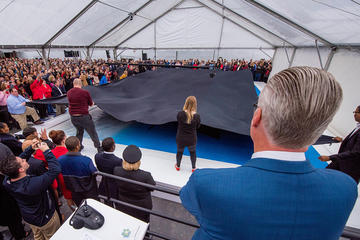 Celebrations around the world

Delta employees working together as one have made Delta the Most Awarded Airline.* To commemorate this milestone and honor their 2017 performance and hard work, the airline created a puzzle from the hull of a retired Delta 747, which will be unveiled at the airline’s Atlanta headquarters at the Delta Flight Museum. 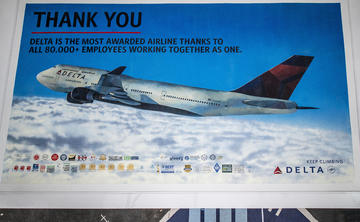 Following the ceremony, each of the airline’s more than 80,000 Delta employees will receive a puzzle piece, serving as a constant reminder of the importance and impact of their efforts on the company’s overall success, working together. 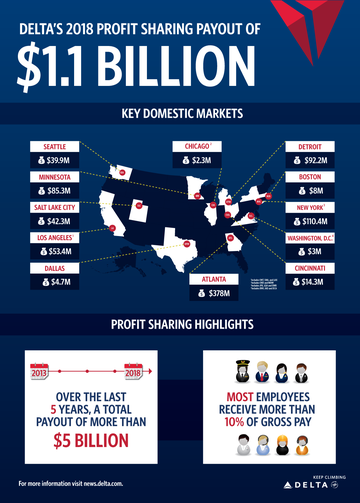 Delta Air Lines serves more than 180 million customers each year. In 2018, Delta was named to Fortune's top 50 Most Admired Companies in addition to being named the most admired airline for the seventh time in eight years. Additionally, Delta has ranked No.1 in the Business Travel News Annual Airline survey for an unprecedented seven consecutive years. With an industry-leading global network, Delta and the Delta Connection carriers offer service to 313 destinations in 54 countries on six continents. Headquartered in Atlanta, Delta employs more than 80,000 employees worldwide and operates a mainline fleet of more than 800 aircraft. The airline is a founding member of the SkyTeam global alliance and participates in the industry's leading transatlantic joint venture with Air France-KLM and Alitalia as well as a joint venture with Virgin Atlantic. Including its worldwide alliance partners, Delta offers customers more than 15,000 daily flights, with key hubs and markets including Amsterdam, Atlanta, Boston, Detroit, Los Angeles, Mexico City, Minneapolis/St. Paul, New York-JFK and LaGuardia, London-Heathrow, Paris-Charles de Gaulle, Salt Lake City, São Paulo, Seattle, Seoul, and Tokyo-Narita. Delta has invested billions of dollars in airport facilities, global products and services, and technology to enhance the customer experience in the air and on the ground. Additional information is available on the Delta News Hub, as well as delta.com, Twitter @DeltaNewsHub, Google.com/+Delta, and Facebook.com/delta.

*Delta received the most awards for calendar year 2017 based on survey of each U.S. carrier's News Room.