“We are often asked what makes Delta different,” said Delta’s Chief Executive Officer Richard Anderson and President Ed Bastian in a memo sent to employees today. “The difference is you. Our unique people-focused culture, built on the Rules of the Road and working together, is the advantage that none of our competitors can match.”

Employee celebrations across Delta’s global network today honor employees for their record-breaking performance. To take record-setting one step further, the airline erected a 50-foot tall greeting card at the Delta General Offices, which included the names of every Delta employee – all 80,000 of them. 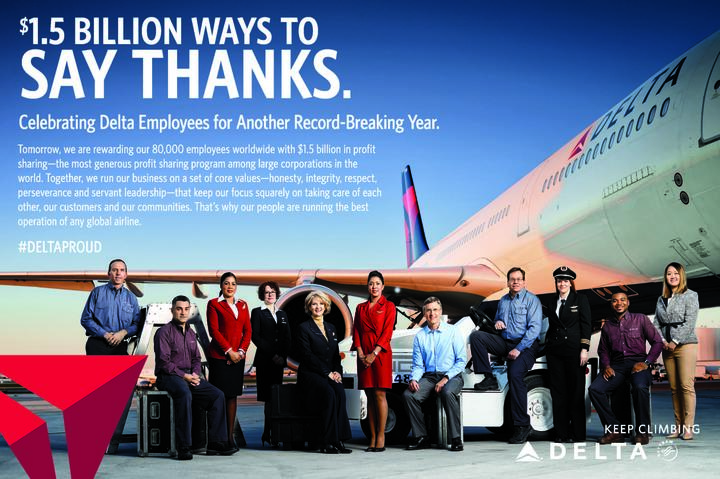 The airline also thanked employees with ad placements in U.S. newspapers, including The New York Times, Los Angeles Times and The Atlanta Journal-Constitution, among others.

Delta reported a historic pre-tax profit of $5.9 billion for 2015 and had an industry-leading year in operational excellence including a total of 214 days with zero domestic mainline cancellations and an on-time rate of 85.9 percent.

In 2015, Delta employees earned more than $94.9 million in Shared Rewards as the company achieved history-making operational and financial results. Delta has paid out $4.1 billion to employees in profit sharing and Shared Rewards during the past five years.

The airline will operate on a conservative 2016 budget with the goal of maintaining a sustainable business that is committed to paying down debt, investing in its employees and rewarding customers and shareholders.

Check the Delta News Hub for photos and updates, and follow updates throughout the day on Twitter  @DeltaNewsHub, #DeltaProud.