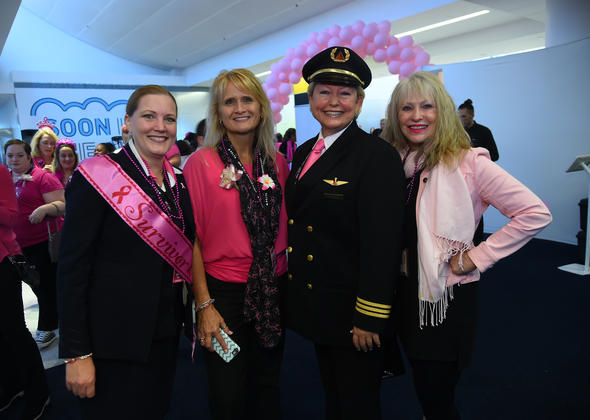 Delta people and customers from across the globe showcased their commitment to ‘Carrying Us Closer to a Cure’ by raising an unprecedented $1.8 million for the Breast Cancer Research Foundation during the airline’s 2016 campaign which took place last October.

Delta leaders and employees will present BCRF with the donation at its annual Hot Pink Party at the Park Avenue Armory in New York City Friday night. This year’s donation exceeded the airline’s 2015 donation by $50,000.

“Each year, I am blown away by the commitment of our employees, customers and their friends and families worldwide to support BCRF and its commitment to finding a cure,” said Allison Ausband, Senior Vice President — In-Flight Service. “Our partnership with BCRF directly aligns with our mission of not only supporting each other, but also the communities where we live, work and serve each day. I want to extend a huge thank you to all of our Delta team members worldwide and customers for working together to make a difference.”

Delta’s month-long campaign to generate awareness and raise money for BCRF kicked off with the airline’s 12th annual “Breast Cancer One" employee survivor flight, which carried more than 140 employee breast cancer survivors on board the airline’s iconic pink plane from New York City to Los Angeles.

During the campaign, employees donned pink uniforms and sold pink products such as pink lemonade and pink-branded headsets, on board Delta flights and in Delta Sky Clubs with all sales benefiting BCRF. The airline also set up Pink Boutiques across the system where Delta people could contribute to the campaign by purchasing BCRF merchandise. In addition, employees and customers were able to donate on Delta’s BCRF website as well as on board flights.

Since 2005, Delta employees, customers and their friends and families have raised $12.8 million for BCRF, including last year’s efforts of $1.75 million. The collective contributions have funded the vital work of 44 different research projects over the years in the pursuit of eradicating breast cancer. Delta’s contributions are fully funding seven BCRF research grants in the 2016-2017 year. These projects span London, Australia, New Zealand, Paris, New York, Seattle, Michigan, California and Indiana.

Delta employees and customers are committed to raising donations to help fund research projects and grants to ultimately end breast cancer. That’s #WhyResearch is important to Delta. Throughout the month of May, Delta people can support BCRF by sharing a post about their story with the hashtag #WhyResearch. For every post, $5 will be donated up to $10,000.

Interested customers and employees are also able to donate to BCRF year-round through SkyWish, the charitable arm of Delta's SkyMiles frequent flyer program which allows Delta and its SkyMiles members to donate miles to charitable organizations worldwide.