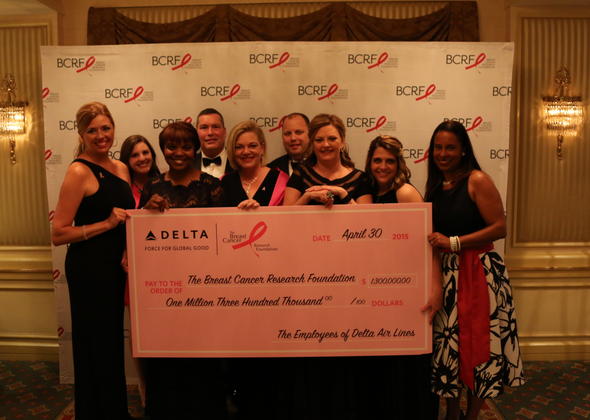 Delta presented the Breast Cancer Research Foundation with a donation of $1.3 million Thursday at its annual Hot Pink Party at the Waldorf Astoria in New York City.

Sandy Gordon, V.P.–In-Flight Service Field Operations, along with employees from In-Flight Service, Flight Operations and Airport Customer Service, presented BCRF with the donation, which was raised by Delta employees and customers during its annual breast cancer awareness campaign last October. This year’s donation exceeded the airline’s 2013 donation by $250,000.

“Delta employees and customers share a passion for supporting BCRF and its critical mission of finding a cure for breast cancer,” Sandy said. “Delta’s commitment to BCRF and breast cancer research is strong and we are honored to partner together to make a difference in the lives of those impacted by this disease.”

More than 1,000 of New York City’s most prominent philanthropists and celebrity guests attended this year’s Hot Pink Party, which supports the organization’s mission to raise funds for lifesaving breast cancer research. At the event, which raised nearly $7 million for breast cancer research, Leonard Lauder, Co-Chairman of the BCRF Board of Directors,was presented with the Sung Hero Award.

“Delta's commitment to breast cancer research has saved millions of lives,” Lauder said. “We are so grateful for the work Delta employees do year-round to support BCRF.”

Delta’s month-long campaign to generate awareness and raise money for BCRF kicked off with the airline’s 10th annual “Breast Cancer One" employee survivor flight, which was operated on the airline’s pink Boeing 767-400 aircraft from Hartsfield-Jackson Atlanta International Airport to New York-JFK. Survivors were commemorated by Delta leaders, employees and customers during festivities at both airports and were treated to an overnight stay in New York, where they met with some of BCRF’s world-renowned researchers.

During the campaign, employees donned pink uniforms and sold pink products such as pink lemonade and pink-branded headsets, on board Delta flights and in Delta Sky Clubs with all proceeds benefiting BCRF. The airline also set up 23 Pink Boutiques across the system where Delta people could contribute to the campaign by purchasing BCRF merchandise.

In addition, employees and customers were able to donate on Delta’s BCRF website as well as on board flights.

With this year’s donation, Delta's employees, customers and their friends and families have raised $9.2 million for the Breast Cancer Research Foundation since 2005. Delta's contributions have funded the vital work of 31 different research projects over the years in the pursuit of eradicating breast cancer.

BCRF advances the world's most promising research to eradicate breast cancer. Founded by Evelyn H. Lauder in 1993, BCRF has raised more than $550 million to fuel discoveries in tumor biology, genetics, prevention, treatment, survivorship and metastasis. By spending 91 cents of every dollar on research and public awareness, BCRF remains one of the nation's most fiscally responsible nonprofits.

The 2014 campaign marked Delta’s 10th year in partnership with BCRF.