In the rain, wind and cool temperatures, 75 employees volunteered to help build a Delta sponsored playground in Cook Park on Saturday, Oct. 20 in downtown Atlanta. The Rodney Cook, Sr. Park is a key part of the revitalization efforts of Atlanta's Westside community in the historic Vine City neighborhood, which is where the home of the late Dr. Martin Luther King, Jr is located. 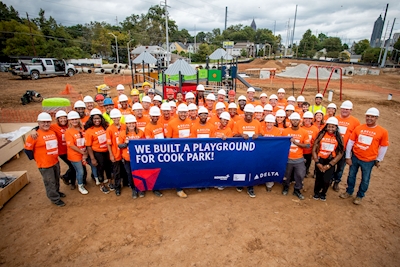 As the City of Atlanta's newest recreational public green space, Cook Park is set to open in 2019 and is a joint venture between the City of Atlanta, the Westside Future Fund, The Trust for Public Land and the National Monuments Foundation. The Delta Air Lines Foundation contributed $1 million toward the park's creation with $500,000 going to the Trust for Public Land for the specific development of a playground and $500,000 going to the National Monuments Foundation that will install monuments honoring historic Atlanta leaders.

Delta people spent the day working with representatives from the Trust for Public Land and construction company Kompan Playgrounds. After mixing concrete, the team assembled a few parts of the colorful playground, such as slides and seesaws, to show residents that the playground is officially underway. Volunteers also built a variety of pieces that will be assembled closer to the park's opening in 2019.

The Delta Air Lines Foundation is a nonprofit corporation formed in 1968 to enhance Delta's charitable giving. The Foundation is focused on the key areas of education and health and wellness.