More than 80 Delta employees, friends and family braved rain and cold and slept on the streets of our Atlanta headquarters on Friday, Nov. 22, at the inaugural Delta Sleep Out. The event was part of Covenant House’s newest initiative called Sleep Out America, where for one night, America sleeps on the streets to raise awareness and money for youth facing homelessness.

The Delta team raised more than $110,000 in support of Covenant House and its mission to help homeless and trafficked young people across North America. A Delta team of 15 also participated in the event at New York’s JFK, sleeping outside in the airport bus depot and raising more than $21,000.

“At Delta, we not only give 1 percent of our net profits to the communities where we live, work and serve, but it’s also about the hands and the feet of the 80,000 Delta employees who go out into our communities every day and make a difference,” said Stephanie Asbury, V.P. - HR Business Partners & Global Talent Management, who serves on the board of Covenant House International. 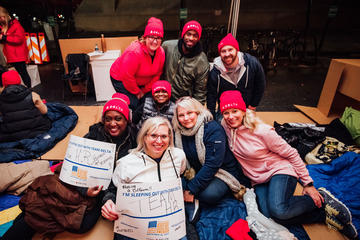 “Covenant House is much more than a homeless shelter. They believe every child deserves not only a safe place to sleep, but also hope for a brighter future. We are so proud of our partnership with Covenant House and are thrilled to bring events like the Sleep Out to all employees at Delta.”

In addition to fundraising, Delta has developed a Career Readiness Program that allows Covenant House youth to be assigned a Delta mentor and to attend sessions on interviewing, writing a resume and professional speaking. The Delta Career Readiness Program has been in place in Atlanta since 2017 and has produced several Delta hires, including Tony Addison, Ready Reserve Ramp Agent.

“When I first got hired by Delta Air Lines it was surreal; I couldn’t believe it!” Tony said. “From the first time I put on a uniform and went out there to work—it was pretty awesome!”

It wasn’t just employees sleeping out; Delta leaders slept out as well. With sleeping bags and cardboard serving as their beds, 50 Delta leaders took to the streets in Atlanta, Detroit, Los Angeles, Miami and New York alongside other corporate leaders at the annual Covenant House Executive Sleep Out the week before Thanksgiving. The event allows executives from all over the U.S. to use their influence to raise awareness and critical funds to help get homeless kids off the streets.

Delta is a corporate sponsor of Covenant House, which has cared for young people for over 40 years and stands as a powerful human rights movement for homeless and trafficked youth in 31 cities across six countries.