Volunteers from the Official Airline of the Falcons built 100 bikes for partners including the YMCA and Atlanta Police Foundation.

In celebration of the 100th season of the National Football League, Delta and the hometown Atlanta Falcons teamed up to build 100 bikes for people in the Atlanta community. 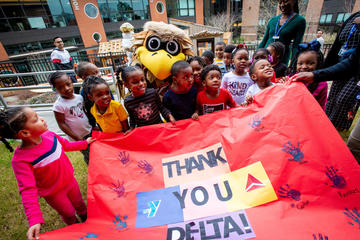 This week more than 180 Delta people volunteered their time to transform the Delta SKY360 Club at Mercedes-Benz Stadium – home of the Falcons - into a bike-building workshop.

Delta people were joined by mascot Freddie the Falcon, Falcons cheerleaders and former Falcons greats Mike Jenkins, Michael Turner and Alge Crumpler, who participated in the bike building process as well as a special delivery of the bikes to preschool students at the YMCA following the build.

“Seeing the smiles on the children’s faces and hearing the screams of pure delight as they ran toward their new bikes was contagious. It gives me great pride to work for a company that prioritizes giving back to communities and holds this practice so core to our culture,” said Sandy Gordon, Senior Vice President – Airport Operations, Domestic Stations.

These 100 bikes are being donated to Atlanta partners including the YMCA of Metro Atlanta and the Atlanta Police Foundation.

“It’s an honor to be a part of an organization that encourages and supports its employees to volunteer,” said Delta employee Carly Ginburg. “This is all about giving back to the communities where we live, work and serve, with the hope of making someone else’s life a little bit better.”

About Delta’s Partnership with the YMCA

Delta supports the YMCA's efforts to ensure that everyone – regardless of age, income or background – has the opportunity to learn, grow and thrive. 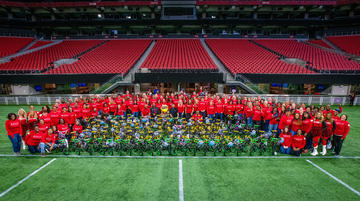 “The YMCA partnership allows us to provide support both financially and through lending our time and talents in volunteerism,” said Sandy. “Their work to build community, educate and encourage the health and wellness of our youth is important and lines up with our mission."

Delta and the YMCA share a core belief: strengthening our communities is only possible when we work together. This mission is under way at 27 YMCA chapters on three continents, where Delta serves as a partner to support children, adults and families with programs and services that span financial assistance and global education to afterschool care and healthy living.