SEATTLE — Delta and the Port of Seattle on Tuesday broke ground on the new international arrivals facility at Seattle-Tacoma International Airport, marking the start of construction on a critical infrastructure investment for the Puget Sound region.

Representatives from Delta, the Port of Seattle, local elected officials and hundreds of guests were in attendance to break ground on the $766 million, 450,000 sq. ft. facility, which is scheduled to open in late 2019. 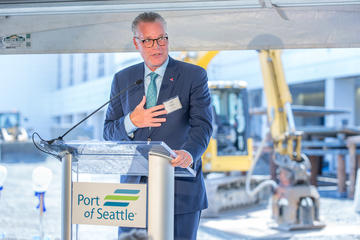 As the largest operator of international flights at Sea-Tac, Delta will be the largest user of the facility and has worked closely with the Port in support of the project.

“The new International Arrivals Facility is a critical infrastructure investment that will make Seattle a true global gateway and will serve the people of the Puget Sound region for decades to come,” said John Caldwell, Delta’s Vice President – Seattle. “With nonstop service to 16 international destinations in Europe, Asia, Mexico and Canada, Delta is the largest operator of international flights at Sea-Tac. We have worked closely and in partnership with the Port of Seattle over the last three years to help bring this vision to life and look forward to 2019 when our customers will experience the world-class facility they deserve.”

The current, 44-year-old facility was originally designed to serve 1,200 passengers per hour and no longer meets demand as the local economy and traffic at Sea-Tac continues to grow. The new facility, located to the east of the current Concourse A, will be able to serve 2,600 passengers per hour and will double the number of gates capable of serving international wide-body aircraft. The facility will also have more than twice the number of passport check positions and kiosks and will simplify the baggage claim process for passengers with checked baggage.

The new international arrivals facility will complement Delta’s $27 million in investments at Sea-Tac over the last few years, including the airline’s new Delta Sky Club between concourses A and B, and the billions more we’ve invested in the customer experience across our system, including in new cabin interiors, Wi-Fi, free entertainment, onboard food and beverage, biometric and RFID technology, and much more. 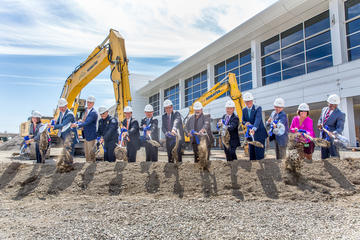 Delta is the largest global carrier at Sea-Tac with 160 peak-day flights to 50 destinations and has more than tripled flights and destinations at its Seattle hub since 2012. Every Delta flight from Seattle features jet service with Delta One/First Class and Delta Comfort+ seating. Free entertainment is available via Delta Studio, and Wi-Fi is available on all long-haul international flights and nearly every domestic flight operating in the contiguous U.S. The airline opened a 21,000 sq. ft. Delta Sky Club – the third largest Sky Club in Delta’s system – located between Concourses A and B in late 2016.

Delta’s 3,200 employees in the Puget Sound region are active members of the Seattle community, giving their time and resources to more than 100 organizations close to the hearts of Seattleites, including Habitat for Humanity – Seattle King County, Boys & Girls Club of King County, PATH, Seattle Theatre Group, Seattle Pride and End AIDS Walk Seattle, among others. The airline’s expansion at Sea-Tac is estimated to contribute $571 million annually in total economic output. In 2016, Delta paid out more than $53 million in profit sharing to its Seattle employees and committed to contributing 1 percent of its net income from the previous year to key charitable organizations, including organizations in Seattle.