Delta to relocate, upgrade operations at LAX through $1.9B plan 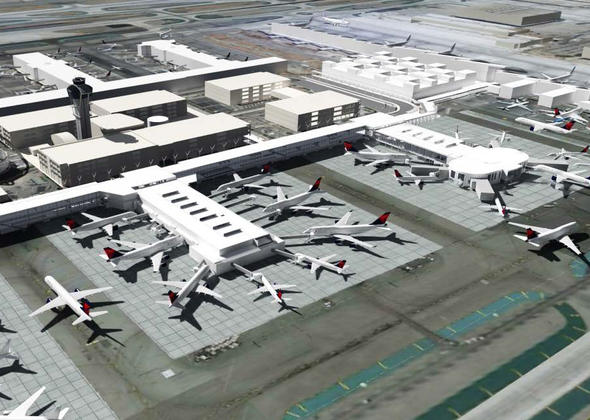 Delta is moving forward with the first steps toward a $1.9 billion plan to modernize, upgrade and connect Terminals 2 and 3 at Los Angeles International Airport (LAX) over the next seven years. Los Angeles World Airports’ (LAWA) Board of Airport Commissioners approved a terminal facilities lease and license agreement earlier today. The future project, which will also provide a secure connector to the north side of the Tom Bradley International Terminal (TBIT), enables Delta to build a premier space for its LAX operations alongside its airline partners.

“LAX is America’s gateway to the world, and it’s helping to power an economic resurgence across our city,” said Los Angeles Mayor Eric Garcetti. “This agreement represents a monumental step forward as we invest billions to make LAX the world-class airport that Angelenos and our visitors expect and deserve.”

“This is a significant milestone for Delta in Los Angeles, and it illustrates a strong, successful public-private partnership,” said Delta CEO Ed Bastian. “Delta is working hard to become the preferred airline for Angelenos, and this project reinforces our commitment to our LAX hub and to an ever-higher level of service for our customers.”

The relocation will expand Delta’s gates at LAX in accordance with the airline’s growth there. Since 2009, Delta has more than doubled its number of seats and grown from 70 daily departures to more than 175.

By relocating from Terminals 5 and 6 to the complex at Terminals 2 and 3, Delta will operate alongside many of its airline partners, including Aeromexico, Virgin Atlantic, and Virgin Australia. Later, a secure connection to TBIT will enable seamless access to additional partners, including Air France-KLM, Alitalia, China Eastern, and China Southern.

Once remodeled, the new space will provide all the amenities that Delta’s customers have come to expect at LAX, including a private Delta One check-in lounge, new Delta Sky Clubs, fast check-in for Delta Shuttle services, and an integrated in-line baggage system. The facility will offer convenient passenger flows, sufficient gate-area seating, and a world-class concession program in partnership with Westfield Corporation.

“Ultimately, Delta’s new home base at LAX will provide everything our customers currently benefit from at Terminal 5, along with enhancements that will enable best-in-class check-in, faster connection times for seamless connectivity, and an industry-leading customer experience,” said Ranjan Goswami, Delta Vice President – Sales, West.

The project also supports LAWA’s broader efforts to enable a more balanced and efficient airport for customers and airlines; provide a smooth connection to LAWA’s planned Landside Access Modernization Project, once completed; and upgrade and modernize LAX before the city’s bid for the 2024 Summer Olympic Games.

“The ongoing $8.5-billion LAX Modernization Program has resulted in a new Tom Bradley International Terminal, airfield and roadway improvements, as well as over $2 billion invested by airlines to renovate Terminals 1, 5, 6, 7 and 8,” said LAWA Board President Sean Burton. “Partnering with Delta Air Lines will allow both parties to further our shared goal to significantly improve the guest experience at LAX.”

“LAWA and all our airline partners are committed to continuing to transform LAX into a leading-edge facility that delivers an experience that truly caters to the modern traveler,” said LAWA CEO Deborah Flint. “This project will create a more balanced and efficient airport for both customers and airlines, as well as allow for the co-location of Delta with its partners.”

Following today’s lease approval by the LAWA board, Delta will move forward with an initial investment of $350 million to design and renovate gate areas, support space and other amenities for passengers; upgrade the baggage handling systems in the terminals; and facilitate the relocation of those airlines currently located in Terminals 2 and 3 to Terminals 5, 6, and TBIT in accordance with a relocation plan vetted with the other airlines and approved by LAWA. The project remains subject to further approval by the Los Angeles City Council and other agencies.

“We are grateful for our partnership with LAWA as we work together to invest at LAX, and we look forward to engaging the Los Angeles City Council and other parties on forthcoming review and approval of this important investment,” said Bastian.

In 2015, Delta became one of the first airlines to partner with LAWA on a major terminal redevelopment program when it successfully delivered a $229 million facilities enhancement of Terminal 5 at LAX. That project introduced a newly remodeled Delta Sky Club, a renovated Sky Priority lobby and a brand new premium check-in experience, Delta ONE at LAX, The terminal also features new jet-bridges and baggage carousels as well as international baggage recheck facilities. In conjunction with the redevelopment, the terminal’s concessions program was updated to feature locally popular offerings that reflect the diversity, cuisine, and lifestyle of Los Angeles.

Since 2009, Delta has been the fastest-growing carrier at LAX. This year, the airline launched five daily flights from LAX to Denver International Airport, a key route for business travelers in Los Angeles; expanded the Delta Shuttle to include Los Angeles-Seattle and Seattle-San Francisco in addition to Los Angeles-San Francisco; increased service to both New York-JFK and Seattle to 10 daily flights; added a third daily flight to Boston; and will be launching new Aspen service in December.

Delta offers more premium cabin seating from LAX and more on-demand audio and video than any other airline serving Los Angeles. All Delta flights from LAX also provide free premium entertainment through Delta Studio; Wi-Fi is available on every domestic flight. The airline continues to build on its efforts to serve the specialized needs of customers in the Los Angeles entertainment, production and tech industries through nonstop service to top industry destinations, exclusive partnerships that provide premium in-flight content on Delta Studio, and curated travel experiences like the Delta Festival Shuttle.

Delta’s commitment to Los Angeles also means more than providing exceptional service in the skies and on the ground at LAX. Its 3,800 LA-based employees are also deeply integrated into the community, working with organizations and supporting causes that are near and dear to the hearts of Angelenos, including AIDS Walk Los Angeles, Children’s Hospital Los Angeles, Covenant House California, Habitat for Humanity of Greater Los Angeles, Junior Achievement of Southern California, KaBOOM!, LA Regional Food Bank, and The Motion Picture and Television Fund, among many others.