Worth, of Fayetteville, Ga., retired from Delta in 1999 after a 39-year career at the airline. The Virginia native started as a Dallas ramp agent, loading baggage onto aircraft, and worked his way up through the ranks to the COO position in Atlanta after guiding the company through a difficult executive transition in the late 1990s. 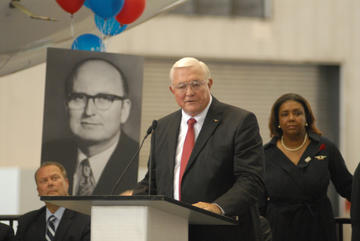 When Delta’s chairman and CEO Ronald Allen left the company in 1997, Worth served as interim chief executive until Leo Mullin took over the role in August. Many remember the time as a defining moment in Worth’s career that earned him the respect and admiration of the entire company. At a management meeting shortly after inheriting the top job, Worth told Delta leaders, “I don’t know if I’ll be in this job for a week or a month or forever, but during that time, we are not going to stand still. We have a lot of work to do and we are going to move forward. We need each other now more than ever before.”

President and incoming Delta CEO Ed Bastian paid tribute to Worth’s legacy of leadership, saying, "Maurice was one of the giants, whose shoulders we stand on at Delta. He was a beloved figure and one of the authors of today's success. Our thoughts and prayers are with his family.”

Worth is survived by his wife of 55 years, Rosa Lee Worth; his son, Michael Worth and his wife Cheri of Athens, Ga.; and his mother, Mary Worth of Fayetteville.