​​Delta Air Lines​ (NYSE: DAL) today reported operating performance for March 2019. The company carried a record 17.6 million customers in the month of March and a first quarter record 45 million passengers across its broad global network in 2019. 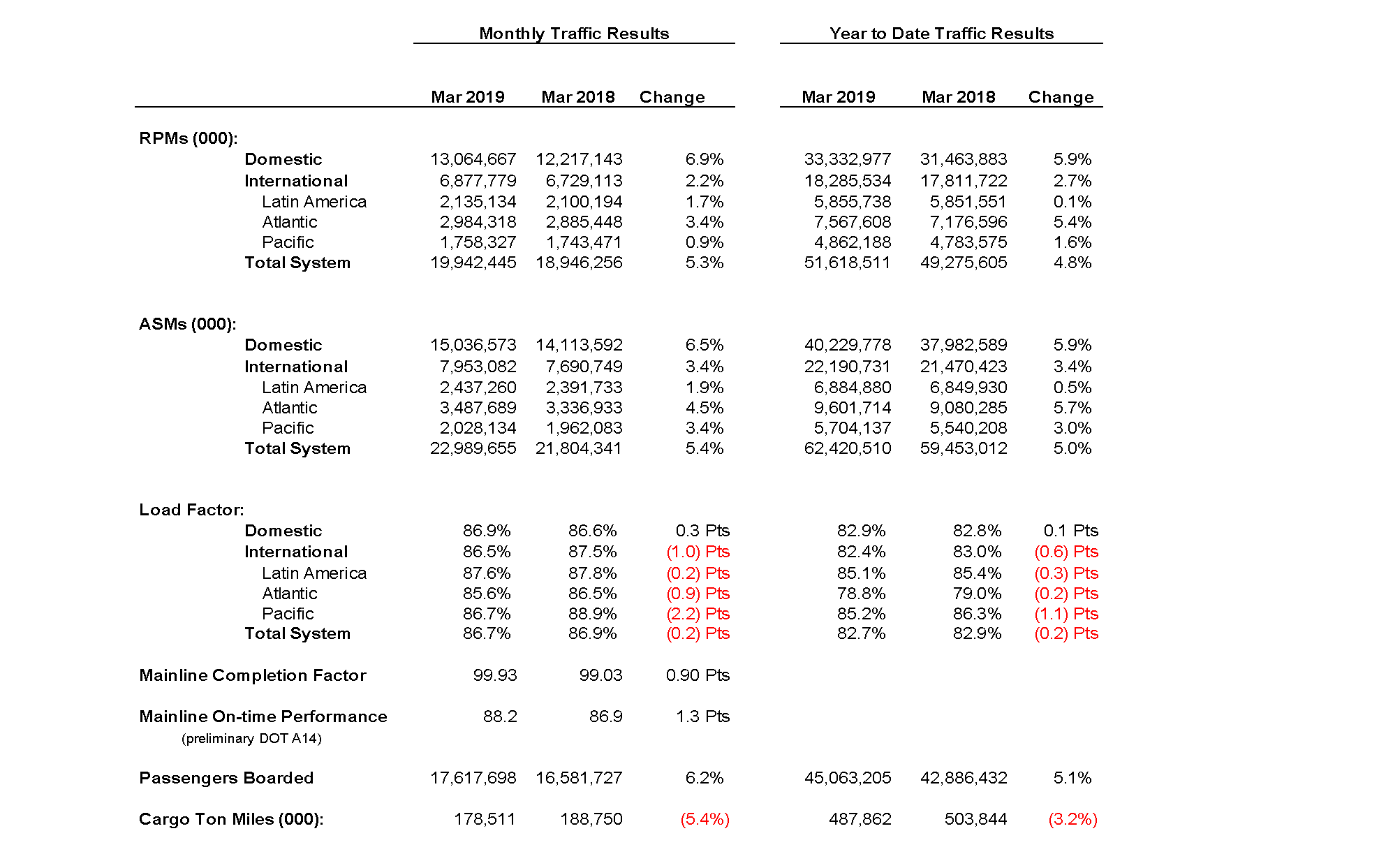 Statements in this press release that are not historical facts, including statements regarding our estimates, expectations, beliefs, intentions, projections or strategies for the future, may be "forward-looking statements" as defined in the Private Securities Litigation Reform Act of 1995. All forward-looking statements involve a number of risks and uncertainties that could cause actual results to differ materially from the estimates, expectations, beliefs, intentions, projections and strategies reflected in or suggested by the forward-looking statements.  These risks and uncertainties include, but are not limited to, the cost of aircraft fuel; the availability of aircraft fuel; the impact of fuel hedging activity including rebalancing our hedge portfolio, recording mark-to-market adjustments or posting collateral in connection with our fuel hedge contracts; the performance of our significant investments in airlines in other parts of the world; the possible effects of accidents involving our aircraft; breaches or security lapses in our information technology systems; disruptions in our information technology infrastructure; our dependence on technology in our operations; the restrictions that financial covenants in our financing agreements could have on our financial and business operations; labor issues; the effects of weather, natural disasters and seasonality on our business; the effects of an extended disruption in services provided by third parties; failure or inability of insurance to cover a significant liability at Monroe's Trainer refinery; the impact of environmental regulation on the Trainer refinery, including costs related to renewable fuel standard regulations; our ability to retain senior management and key employees; damage to our reputation and brand if we are exposed to significant adverse publicity through social media; the effects of terrorist attacks or geopolitical conflict; competitive conditions in the airline industry; interruptions or disruptions in service at major airports at which we operate; the effects of extensive government regulation on our business; the sensitivity of the airline industry to prolonged periods of stagnant or weak economic conditions; uncertainty in economic conditions and regulatory environment in the United Kingdom related to the exit of the United Kingdom from the European Union; and the effects of the rapid spread of contagious illnesses.

Additional information concerning risks and uncertainties that could cause differences between actual results and forward-looking statements is contained in our Securities and Exchange Commission filings, including our Annual Report on Form 10-K for the fiscal year ended December 31, 2018.  Caution should be taken not to place undue reliance on our forward-looking statements, which represent our views only as of April 2, 2019, and which we have no current intention to update.​