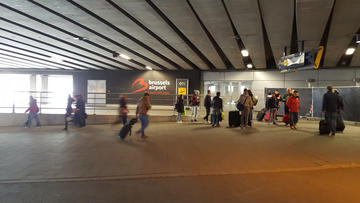 Seventeen days after the bombings that shut down Brussels Airport, Delta restarted service to the city Thursday carrying heartfelt gestures of support and solidarity along with passengers.

The Brussels-bound aircraft was carrying glass boxes filled with thousands of origami hearts folded by Delta employees in Atlanta and New York. Many hearts carried personal messages employees wrote inside. The boxes will be delivered to the public memorial site in the Belgian capital and presented to the airline’s employee team in the city, whose tireless work made the resumption of service possible. 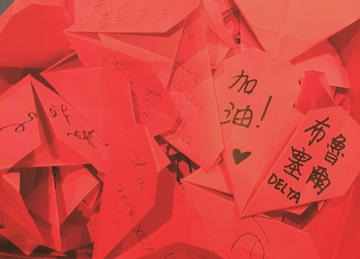 Delta’s incoming CEO Ed Bastian folded a heart himself. “Delta’s thoughts and prayers have been with all of those impacted by this tragedy – and what our people are doing in Belgium to take care of our customers and each other is just phenomenal. A special thanks to the Delta Board Council (employee group) who spearheaded this effort to give us an opportunity to send our love to Brussels.”

Meanwhile, the team in Brussels spent Thursday making the final arrangements for the departure of the JFK-bound flight Friday morning with the set-up of mobile check-in pods. They also reviewed several new processes the team will need to guide customers through a very different check-in experience.

“On the operations side there have been many challenges that we have had to overcome but we have a sense of relief that the first flight is almost here,” said Delta’s Brussels Station Manager Jean-Michel Teron.

The airport that re-opens to international flights this week will not be the same one that served customers before the terrorist attack. Brussels Airport remains badly damaged by the blasts, and that has challenged the logistical skills of Delta’s teams in Brussels and beyond. 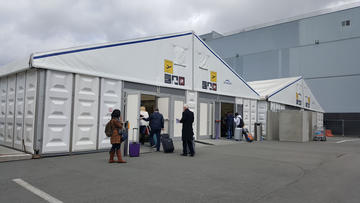 Since the airport re-opened for limited, regional operations Sunday, security has been dramatically stepped up. Only passengers holding a printed boarding pass will be able to go beyond the temporary structures and into the terminal. That could complicate matters for the large number of customers who normally use mobile boarding passes or print theirs at the airport.

So Delta brought in “Portable Agent Workstations” and placed them in the passenger drop-off area. Battery powered and using 4G technology, the workstations are the only way to guarantee every Delta passenger will be allowed access to the terminal.

“Access to the terminal remains the biggest challenge, which is why we are setting up the workstations in the car park,” said Julie R., an Atlanta-based Delta employee helping the Brussels team. “There’s a risk that Delta passengers without a boarding card could be denied entry to this area, so we want to do everything we can to help our passengers.”

Once inside the building, customers must climb 62 stairs - elevators are also available - to the original security and passport control. Arriving passengers, meanwhile, will follow the usual route. Those areas were undamaged by the blasts. 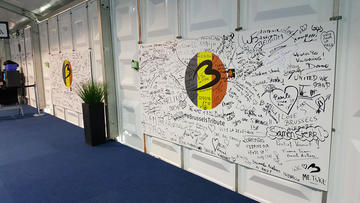 Because of heightened security, Brussels-to-JFK passengers are being advised to arrive at the airport very early due to the additional security checks in place. Check-in for Friday’s outbound flight will be open at 7 a.m. local time – four hours ahead of the scheduled 11:05 a.m. departure.

In a small but symbolic gesture, customers on the Brussels-JFK flight will receive Belgian chocolates onboard, as well as pins.

As repairs to the airport continue, the number of flights will gradually increase, particularly as the peak summer travel period nears. The airport hopes to be back at maximum capacity by July.

Delta’s Brussels team members were ready to get back to serving customers, Station Manager Teron said.

“It will be an emotional day for the team but we are looking forward to welcoming our customers and restarting the operation.”

.@Delta employees to the people of #Brussels: Our hearts are with you. #HeartsforBrussels https://t.co/JYGyH9YxN6https://t.co/Vp20GBKt9N