A near normal schedule was conducted Thursday at Houston’s largest airport with flights arriving and departing from Delta’s hubs in Atlanta, Detroit, Minneapolis and Salt Lake City. The airline also resumed its schedule at Houston-Hobby Airport.

“Our teams in Houston have worked tirelessly over the last several days, amid some very challenging circumstances, to make sure we were up and running as soon as possible for Delta customers,” said Michele CarsonVaughn, Delta’s Director – Airport Customer Service. “It’s been a herculean effort by our teams in Houston and elsewhere throughout the system to ensure we have the supplies, resources and people in place to ramp our operations back up and reestablish flights to Houston.”

Delta flew in a group of airport customer service agents, IT and corporate security personnel and aircraft maintenance technicians to Houston to relieve Delta’s Houston-based teams and ensure a smooth operational startup.

Also, while no operational impact is anticipated at this time, Delta is closely monitoring the supply and distribution situation of jet fuel in the U.S. as refineries restart operations along the Gulf Coast.

Customers should check delta.com or the Fly Delta Mobile App for latest updates to flight status, should conditions change.

Meanwhile, Delta is waiving all bag and pet in cabin fees in all airports to and from the state of Texas between now and Monday, Sept. 4. See delta.com for details.

6:30 p.m., Tuesday: As of Tuesday afternoon, Delta’s operations at the two Houston airports remain shuttered following devastating rainfall throughout southeast Texas. The airports were closed to commercial flights Sunday following the onslaught of Hurricane Harvey and are expected to remain so until Thursday.

While airport infrastructure at both Houston-Hobby and Houston-Intercontinental airports are intact, rising flood waters have inundated roadways throughout the city making travel to and from the airports difficult. Delta Monday sent a relief flight to Intercontinental to deliver supplies as well as evacuate customers and some employees. That flight landed in Detroit Monday evening.

Delta continues to monitor the changing situation in Houston and will update its operational plan, and timeline to resume flights into Houston soon. A travel waiver remains in effect for customers planning to travel to and from the areas affected by the storm, which includes Houston as well as Austin, San Antonio and several locations throughout Louisiana.

Noon, Monday: As the aftermath of Hurricane Harvey continues, Delta will send a rescue flight to Houston-Intercontinental this afternoon to bring supplies and relief personnel and to evacuate employees and customers. 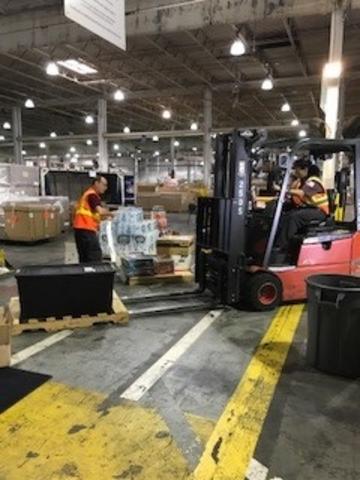 The flight will arrive in Houston at 2 p.m. local time with water, food, amenity kits and other supplies to provide relief to Delta’s Houston-based employees. A group of ground support equipment technicians will also be on board to help repair jetbridges and other equipment that became inoperative as a result of the storm. The flight will then take roughly 40 Delta customers who are still at the airport as well as employees and their immediate families to Detroit, as flood conditions worsen and more rain is predicted over the next several days.

Houston-area airports are expected to remain closed through Tuesday. Delta has updated its travel waiver for customers traveling to and from the areas affected by the storm.

Meanwhile in Dallas-Fort Worth, Delta’s Airport Customer Service team is partnering with Reservation Sales and Line Maintenance to put together an immediate relief fund, including clothing, diapers, formula, tools and more, for Houston over the next few days. Station manager Hal Hayes said that helping their colleagues in Houston is just the right thing to do.

“When we had tornadoes here years ago, Houston dropped everything to help us,” he said. “Our stations here are very close. When something affects one of us, it affects us all.”

Additionally, employees systemwide are contributing to relief efforts by donating through the Delta’s microsite with the American Red Cross.

9 p.m., Sunday: As of Sunday, Houston's Intercontinental and Hobby Airports have been closed due to flooding. All Delta flights have been suspended until further notice. A total of 19 Delta flights, including mainline and Delta Connections operations, have been affected. A waiver remains in effect for customers traveling to and from the areas affected by the storm.​

Despite the flooding, Delta’s Station Manager at Houston-Intercontinental Davina Treadwell says the airline is doing everything possible to keep customers and employees safe and comfortable.

“We’re looking at a lot of options right now to accommodate our customers. In the meantime, we’ve been cooking food for those that are here,” she said. “We’re just riding out the storm at this point.”

With employees’ families in hotels close to the airport, Treadwell said everyone is coming together to make the most of the situation. One employee mentioned it was her daughter’s second birthday, so the team scrappily pulled together a party for her with cake, balloons, candles and decorations. She said she even put on rabbit ears, which had been left over from a previous team celebration, and the team sang happy birthday to her.

“Since we invited employees’ families to stay with them in the hotel rooms we booked, there are a lot of kids running around – and after the birthday party, many of them are calling me Nana Treadwell,” she said. “We’re doing all we can to make the best of a tough situation.”

2 p.m., Saturday: Harvey made landfall as a category 4 storm on Texas's eastern coastline around 11 p.m. ET Friday night, just a couple hundred miles south of Houston's Intercontinental and Hobby airports​. The National Weather Service predicts more than a foot of rain could douse the city over the next five days, and so far, Houston has already seen at least three inches of that rainfall. 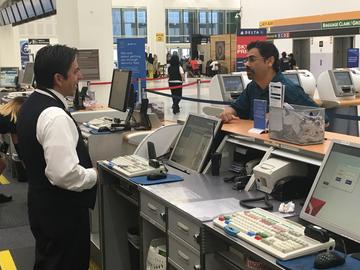 But Davina Treadwell, Delta's station manager at Houston-Intercontinental, said that stormy weather hasn't stopped Delta people from working hard to keep the operation up and running.

"All morning, agents have been re-accomodating customers who aren't able to make it to their flights," she said. Employees at both Intercontinental and Hobby airports are donning rain gear as they work the ramp. 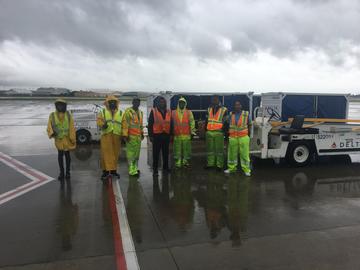 A travel waiver is in effect for those travelling to, from and through Hobby and Intercontinental airports, as well as San Antonio and Austin airports on Aug. 25 - 28.

"Before the storm hit, we stocked up on loads of staple items, and Atlanta has been sending water and bread – which is really sparse right now in Houston – on every mainline flight," Treadwell said. "We've really done our best to think of everything." Delta put employees working over the weekend, along with their families, in hotels near the airport.  Like Hobby, Treadwell mentioned Delta has taken extra precautions to make sure employees are as safe and comfortable as possible. 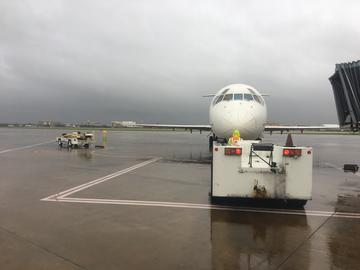 Hurricane Harvey, which Friday afternoon upgraded to a Category 3 storm, is expected to bring high winds and considerable rainfall to the middle Texas coast, with forecasted landfall near Corpus Christi. While Delta doesn’t operate flights to Corpus Christi, high rainfall and an anticipated storm surge in the Houston area as the storm stalls over the coastline could hamper operations at George Bush Intercontinental Airport and Houston Hobby Airport.

Delta issued a weather waiver Wednesday afternoon to allow customers to adjust travel plans around the hurricane without paying a change fee if they are flying to Houston, San Antonio or Austin. The airline hasn’t canceled flights to those airports, but teams at the airline’s Operations and Customer Center in Atlanta as well as locally in Texas continue to monitor changing weather and operational conditions. Delta is also working with local authorities, including the Federal Aviation Administration, Transportation Security Administration and airport officials to evaluate staffing and infrastructure constraints should travel on area roadways or via mass transit become difficult.

"Our plan is to operate full flights as of right now and our teams are ready and have completed thorough preparation for the storm," she said. "We'll stay close to our team members throughout the weekend -- taking care of our customers' and our employees' safety is our top priorty."

Moreno also mentioned that the airports have booked hotel rooms so employees can access the airport easily, and that Delta's Atlanta hub is supporting Houston-area airports by sending supplies of water and will continue to do so throughout the weekend. 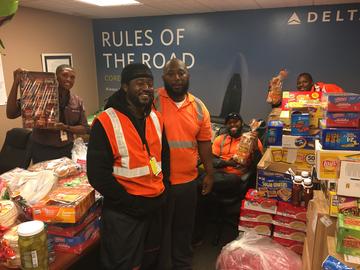 Randy Bialcik, Delta's station manager at Hobby, added that dealing with a storm of this magnitude takes a lot of working together -- as well as stocking up on essentials -- before the storm hits later tonight.

"We've been engaged in lots of briefings and brainstorms with Delta headquarters, business partners and other airports to prepare," he said. "We've got a great team doing a lot of the behind the scenes work to make sure we're in the best position to take this on seamlessly and safely for our valued customers. And, we've spent a lot of time in Walmart, stocking up on tuna, bread, peanut butter and other staples just in case."