Delta congratulated Nigeria's men's soccer team on its social media channels after the squad captured a bronze medal by defeating Honduras in the summer games in Brazil.

Numerous Delta employees became Nigeria fans after the airline carried the stranded team to Brazil just hours before its opening match, which the Nigerians went on to win.

Delta's Facebook and Twitter accounts posted this message Sunday: "Congrats to our friends on the Nigerian men's soccer team for capturing the bronze!" 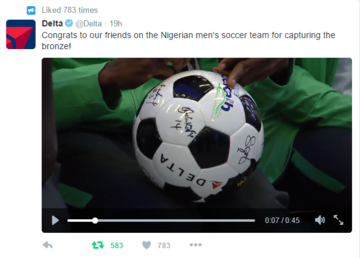 The Nigerian players had practiced in Atlanta for weeks before the games began, then planned to fly to South America. But for nearly a week, the team was unable to get a flight that would allow players to travel together. Previous plans fell through but on Aug. 3, the day before the opening match vs. Japan, Delta Charters received a call from the team and immediately got to work. Simultaneously, Atlanta Airport officials reached out to Delta executives on the team’s behalf. Within six hours and with no request for payment, Delta employees had rounded up a plane normally used to transport NBA teams and had it prepped in time for an early morning departure. The video above shows the scene at the airport.

The Nigerian team arrived in Brazil at 2 p.m. for a 9 p.m. match. After defeating Japan, Nigeria went on to beat Sweden and Denmark. A pair of losses along the way placed the Nigerian team in the bronze medal game, which it won, 3-2. 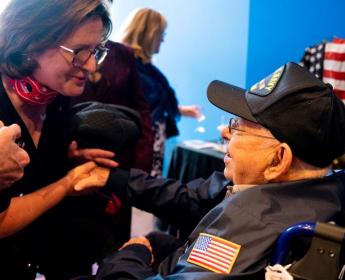