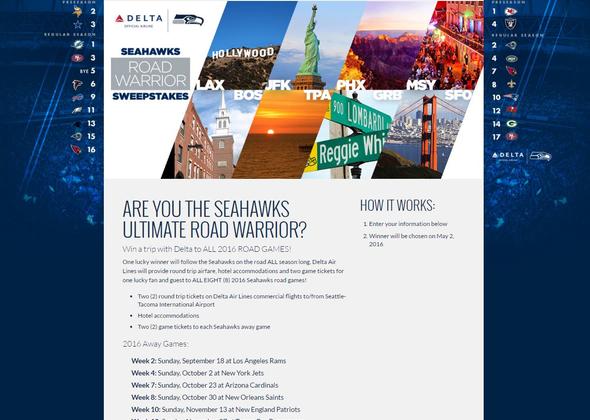 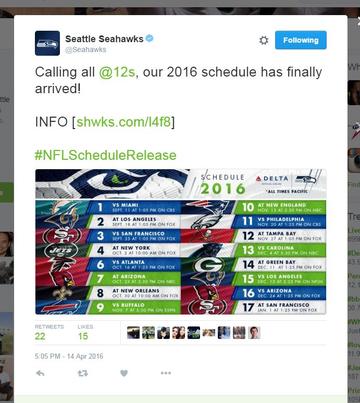 Delta and the Seattle Seahawks capitalized on an important cultural moment for National Football League teams by launching a new promotion timed around the annual NFL schedule release day. The promotion will give one fan the opportunity to experience Seahawks football on the road all season long through the Seahawks Road Warrior Sweepstakes presented by Delta.

As part of the promotion, Delta will provide one lucky winner and a guest with travel and game tickets to each of the team's eight road regular season games, helping to expose Delta’s brand to the team’s passionate fan base.

In Seattle, the Seahawks reign supreme. As the Official Airline of the Seattle Seahawks, promotions like this are important to more closely align Delta’s brand with one of the Pacific Northwest’s most beloved organizations. 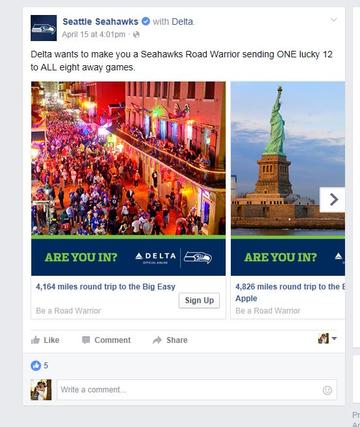 After 48 hours, the contest had already received 18,700 entries and now has had more than 26,000 entries. The teams will have opportunities for further promotion by following the winner as he or she travels to all eight away games this season and by re-contacting the thousands who submitted with future Delta programs to continue engagement.

Delta and the Seahawks celebrated a multi-year partnership extension last October and have been working together to increase awareness of the partnership by activating around natural milestones, like the release of the 2016 NFL schedule.

Delta is the largest global airline at Seattle-Tacoma International Airport and this summer will offer customers more than 140 peak-day departures to 44 destinations. The airline's expansion at Sea-Tac is estimated to contribute $571 million annually in total economic output in the Puget Sound region. The partnership supports Delta’s Flight Plan goal to increase customer loyalty in SEA hub and grow SkyMiles® penetration to 42% of SEA local enplanements.