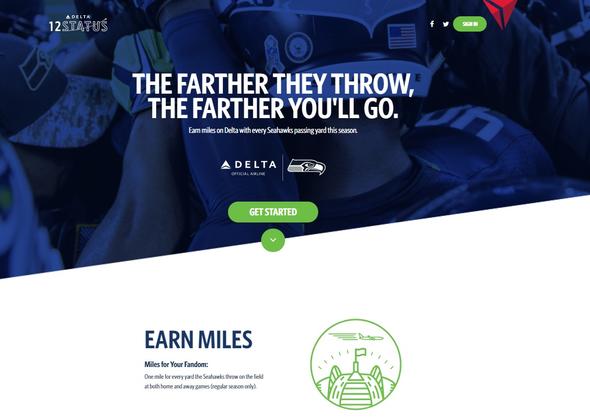 After providing Seattle Seahawks fans with more than 50 million miles last season, Delta's 12status fan engagement program returns for the Seahawks’ 2017 season with upgraded rewards for fans and an all-star team of ambassadors. This year, Delta will double the opportunities to earn miles by giving 12status members one mile for each passing yard during all home and away games. 12status is open to fans in the state of Washington; 2016 members can renew their eligibility by visiting www.12status.com. 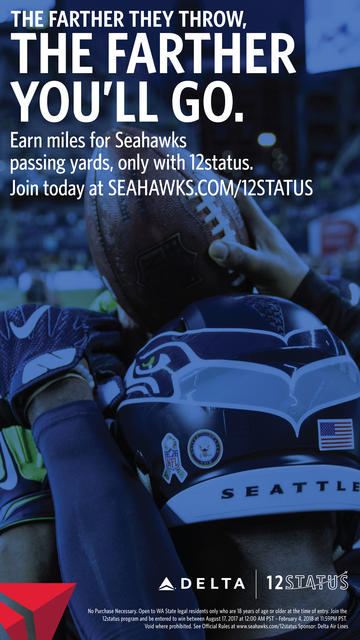 “Last season we registered almost 30,000 Seahawks fans for 12status membership, and we’re excited to kick off another year as the Official Airline of the Seahawks,” said John Caldwell, Delta’s Vice President – Seattle. “With opportunities to earn miles at home and away games this season, it’s more rewarding than ever to be a Seahawks fan and a Delta SkyMiles Member.”

Fans can sign up for 12status at www.12status.com to unlock perks and receive merchandise and exclusive experiences. 12status members are eligible for the following perks and rewards:

The 12status digital hub (www.12status.com) allows members to keep track of miles earned during the season, as well as to keep updated on perks and exclusive offers. The hub also includes each member’s official 12status SkyMiles membership badge to be used for priority boarding at Sea-Tac.

In 2015, Delta and the Seahawks celebrated the extension of their sponsorship and Delta’s status as Official Airline of the Seattle Seahawks. Delta provides charter service for the team to and from each road game. Delta is also represented at CenturyLink Field with a wraparound entitlement space and the Delta Sky360 Club, which spans the entire Club Level at CenturyLink Field. The airline also supports the team’s five-state, 48-station Delta Air Lines Radio Network.

12status is an extension of the airline's You Can't Stop Seattle brand campaign, which reveres Seattleites for their ideas and ambition and celebrates the momentum of the city while telling the story of how Delta helps fuel Seattle's pursuits. It celebrates Delta's relationships with the city's beloved, local teams – including the Seahawks – as well as its support of community organizations close to the hearts of Delta people. You Can't Stop Seattle represents Delta's significant investments in Seattle, which have driven changes across the competitive landscape – from product enhancements, to facility improvements, to financial benefits and community investment.