SEATTLE - Fresh off the assembly line, Delta Ship 3809 – a Boeing 737-900 ER known as the ‘Spirit of Seattle’ – shone as it flaunted its new paint job on a December morning in 2013, nearly 80 years to the day after Delta’s first Seattle flight. A nod to the airline’s history with the Emerald City, the jet has since flown thousands of miles, proudly sharing Delta’s Seattle story in its travels.

That commitment began with a Hamilton H-47 metal plane that carried Delta’s first Seattle passengers in December 1933 on a Tacoma-Seattle-Wenatchee-Spokane route. Later, in a fitting twist, it was Delta predecessor Northwest Airways that helped give Sea-Tac the “international” in its name when it started service to Tokyo in 1947 using the Great Circle Route.

Today, the story continues – but it retains the pioneering spirit for which the Pacific Northwest is known. Instead of prop planes, Delta serves Seattle with some of the largest jets in its fleet. Instead of a single flight to Tokyo, Seattle is a full-fledged international hub for Delta, with service to the top five destinations in Asia and three of the top four in Europe from Seattle-Tacoma International Airport. 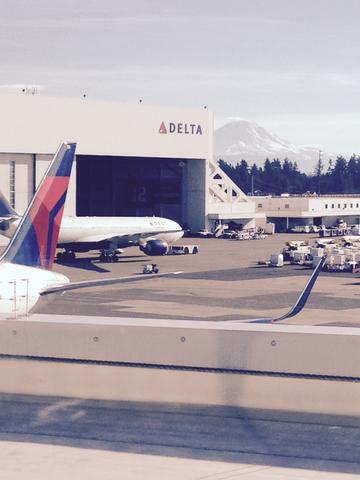 But how – and why – did Seattle grow from a secondary air market to an international gateway?

“In the early years after our merger with Northwest, we had to take a hard look at our network,” said Bob Cortelyou, Delta’s Senior Vice President – Network Planning. “We were well-positioned to compete on the trans-Atlantic because of our joint venture partnership with Air France and KLM, but the holes in our network across the Pacific were gaping, leaving us without a real chance to compete in some of the world’s most important emerging economies.

“We are a global company, and we want to be the airline of choice for customers around the world. And Seattle gave us that chance to compete in Asia.”

Delta’s story in Seattle parallels that of the city itself. Decades removed from its humble beginnings as a lumber town, Seattle is the seat of strong economic growth, widespread prosperity, a burgeoning tech scene and growing interest by investors from one of the world’s most powerful emerging economies: China.

At the center of the growth story is Sea-Tac, now the fastest-growing airport in the U.S., in large part due to Delta’s 35 percent overall growth since July 2014. The airline operates 128 daily departures to 36 destinations from Sea-Tac, including nine long-haul international routes.

Geologists estimate that it took more than 30 million years to form the Cascade Range that defines the region. But things are moving a little more quickly these days – it’s taken less than three years for Sea-Tac to morph from a largely regional operation to an international gateway to key global commerce centers such as London, Shanghai and Tokyo.

“Seattle had so much opportunity, and we moved quickly to fill that gap in our network,” said Mike Medeiros, Delta’s Vice President – Seattle. “Economically, the city is a major commerce center and home to some of the world’s most important brands. Geographically, we are as close to Asia as you can get from the U.S. mainland. And it’s a market that had been severely underserved for many years. It was a natural fit and has very much been a mutually beneficial relationship.”

Many a U.S. airport has fallen victim to the “build it and they will come” fallacy. But in Seattle, “they” were there all along – and now those customers have choice. Despite unprecedented capacity growth, revenue performance and traffic remain strong, showing that Delta’s presence in Seattle has helped to stimulate pent-up demand.

The impact to the region’s economy is significant. Delta’s growth at Sea-Tac is bringing more revenue to the airport – and to the city – than ever. That growth is creating jobs and providing more resources to enhance the airport’s role as a regional economic engine. Delta’s growth will contribute to 4,900 jobs paying $246 million in wages and $571 million in economic output in Seattle. The multiplier is astounding.

And Delta’s growth has placed Sea-Tac among the fastest-growing large hub airports in the U.S., moving more than 100,000 passengers per day. According to the Port of Seattle, nearly 37.5 million people traveled through Sea-Tac in 2014 – a 7.7 percent increase over 2013 – marking its fourth consecutive year of record growth.

Passenger growth at the airport is increasing this year at 13 percent over last year’s record levels. Cargo shipments are up 18.5 percent this year. Forecasts project the airport’s annual passenger numbers will rise to 66 million by 2034. And the Port’s plan to build a new International Arrivals Facility will further cement the Puget Sound region as a global commerce center.

In a sense, the story has come full circle. It’s fitting that Delta – an airline built with the help of Boeing, powered by Microsoft and fueled by Starbucks – all iconic Pacific Northwest brands - and Seattle – a city built on innovation and with deep roots in aviation – would collaborate to help drive the future of both the region and the airline industry. And that future looks bright.