"On behalf of Delta, SkyTeam and our global partners, welcome aboard Flight 9988, the Customer Experience Showcase featuring the A350," a flight attendant announced Tuesday to a plane filled with more than 70 journalists from around the world. 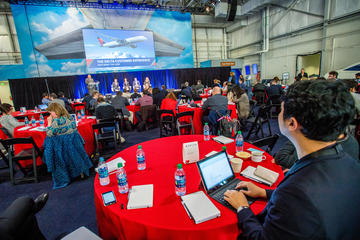 The media event, hosted by Delta's Corporate Communications team at Delta's headquarters in Atlanta, gave reporters, editors and bloggers from 18 countries and 65 outlets a first look at the airline's new international flagship aircraft, the Airbus A350 – including a brief flight. Reporters also heard from leaders and employees about Delta's multi-billion dollar investments in the customer experience.

Delta is the North American launch customer for the A350, which redefines the international onboard experience with the award-winning Delta One suite, the new Delta Premium Select cabin and a Main Cabin with an enhanced feel. The A350 enters into service this month. 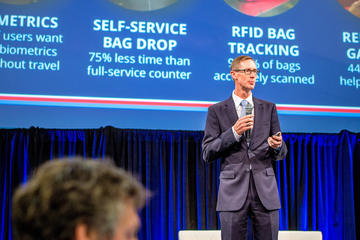 Gareth Joyce, Senior Vice President – Airport Customer Service & President – Cargo, told reporters that the airline's investment in the new aircraft, and in the overall travel journey, is about creating a better experience for customers.

"Our goal is to create powerful memories for our customers to take home with them," Joyce said. To that end, innovation and customer service work hand in hand, he explained.

"The power of culture is the one thing competitors can never compete with us on. By using innovative technologies, we free our people up to have more meaningful interactions with customers." 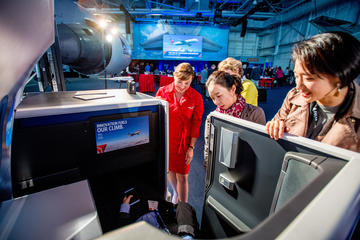 During the two-day event, Delta invited media to experience the airline's recent investments: testing the new Self-Service Bag Drop, tasting food regularly served on the A350's routes and, of course, flying on the aircraft in the Delta One and Delta Premium Select cabins.

"The A350 sets a whole new standard for aircraft," Chief Operating Officer Gil West told the reporters. "It offers a 20 percent improvement in operation costs per seat and 25 percent increase in fuel efficiency compared to comparable aircraft."

Reporters also heard from Lisa Bauer, Vice President – On-board Services, and Andrew Wingrove, Managing Director – Product and Customer Experience, who gave a behind-the-scenes look at developing Delta’s flagship product on the A350 and elevating the onboard experience.

Onboard, reporters had a chance to inspect every detail, from the customizable ambient lighting in the Delta One suite to the six-way adjustable headrest in Main Cabin. Several journalists shared observations about the A350 on social media.​​

Delta pulls back the curtain on its new Airbus A350. The airline will be the first North American carrier to fly the jet. pic.twitter.com/pGASdxyyTp

Journalists also got the scoop on a number of announcements, including Delta's plan to reinvent international Main Cabin dining, offer customers the option of pre-selecting meals and the A350's new routes.

"Well, we just got a bit of great news – in addition to Tokyo, Beijing and Seoul, Delta's flagship plane will soon begin flying to Europe, too," The Points Guy wrote. 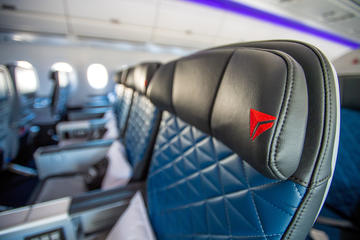 Media also took note of the Delta Premium Select cabin, which is making its debut on the A350:

"The seats are not simply coach seats with extra legroom," wrote USA Today. "Instead, they're entirely different seats that come with extended recline and footrests. The Premium Select seats also come with perks like enhanced meal service, priority check-in and amenity kits."

Once the flight was wheels up, media onboard were given the full Delta treatment: sparkling wine, espresso and ice cream sundaes. The two-hour flight flew from Atlanta, north along the Appalachian Mountains before turning south toward Atlanta.

"(The A350) is part of our story about reliability, innovation and service, and how we're going to make this a better airline," Delta CEO Ed Bastian told the reporters the next morning. "We're constantly focused on improving ... it's the 'Keep Climbing' motive that keeps us going." 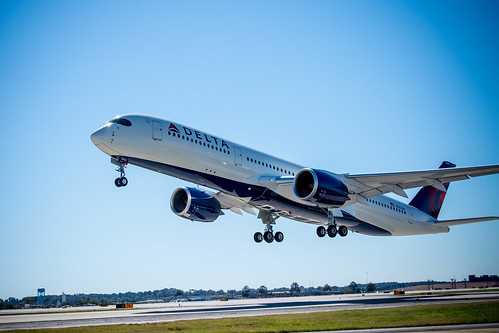