Delta changed the Yankee Stadium skyline in a very big way this week with the official unveiling of its new signage, featuring the Delta widget and 14-foot-tall letters. 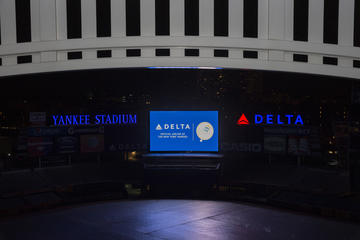 Delta’s prominent signage atop the scoreboard in right-center field is the first time a New York Yankees partner has been granted such significant exposure and is part of Delta’s recently announced eight-year extension of its sponsorship agreement with the team.

“This stadium has produced legends and made history, so to have Delta featured in this way is very special to us,” said Gail Grimmett, Delta’s Senior Vice President – New York. “It represents our deep relationship with not only the New York Yankees, but with the city and the state as well.” 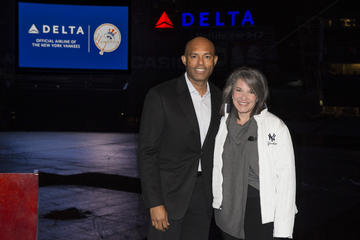 Customers, media, and a very special guest – former Yankees icon Mariano Rivera – were in attendance at the March 3 event. (Rivera poses with Grimmett below.)

Delta has been the team’s official carrier since 2008 and has flown the team nearly 300,000 miles during that time.
Related Topics: