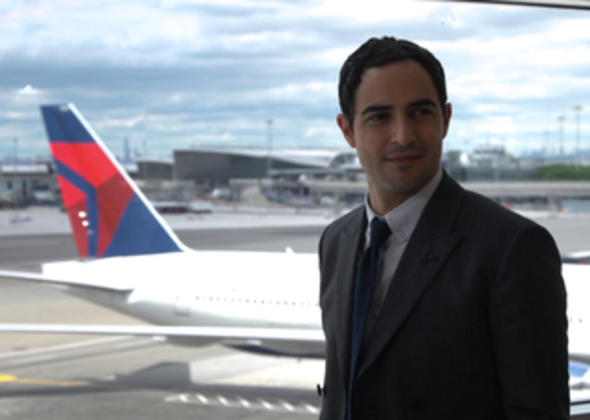 Delta Air Lines and New York-based designer Zac Posen are partnering to bring high fashion and function to a different kind of runway as part of Delta's new uniform program.

Delta is creating a program for nearly all of its uniformed employees. Through the partnership, Zac Posenwill design a uniform collection for Delta's flight attendants and airport customer service agents while advising on the uniform project for Delta's ramp and ground support agents, Delta Cargo agents and Delta TechOps employees.

"Through challenges and triumphs, the Delta uniform has been a source of great pride for generations of Delta people and continues to serve as a symbol of our values and the world class service for which we're known," said Tim Mapes, Delta's Senior Vice President – Marketing. "With Zac's talent and expertise, and in partnership with Delta people worldwide, we look forward to creating a timeless, fashionable and functional new collection that will continue to be a point of pride and symbol of our brand for the 170 million customers who fly with us each year."

Known for his fresh and innovative designs, Posen's brand of modern American glamour pairs well with Delta's brand attributes, and he will be personally engaged throughout the multi-year project. His designs are favored from the White House to the red carpet in Hollywood.

"I'm thrilled to partner with this classic American brand and look forward to collaborating with Delta employees to understand their wants and needs for the new collection," said Zac. "Together, we will bring everyday elegance and style innovation to the ground and air alike, while making employees look and feel their best."

Over the next few months, Posen will work with Delta employees to better understand the specialized needs of Delta's active workforce. The prototypes will then undergo intensive wear testing to ensure functionality and fit before the final collection is produced. Consistent with Delta's culture, employees will drive the project and be heavily involved in every phase along the way.

The new uniform program is part of a larger brand transformation and investment as Delta works to ensure its thoughtful, reliable and innovative brand attributes imbue all areas of the customer experience, including airport facilities, technology and global products and services.

The new collection is expected to launch in early 2018.

Zac Posen launched his eponymous collection in 2001, with a vision for modern American glamour that married couture technique with striking innovation. Raised in New York, Zac began his design training early. At 16, he attended Parson's School of Design followed by London's Central Saint Martins University. Two years following his first collection, he was awarded one of fashion's most prestigious honors, Swarovski's The Perry Ellis Award for Womenswear by the CFDA.

Today, Zac is known globally for his technique in artisanal craftsmanship, anatomical construction and textile manipulation. His daywear, suiting and red carpet eveningwear are infused with his bold sophistication, sexy femininity and distinctive glamour. Worn by leading women, including Uma Thurman, First Lady Michelle Obama, Gwyneth Paltrow and Naomi Watts, he has become a staple on the red carpet. His collections have grown to include Zac Posen, ZAC Zac Posen, Z Spoke Zac Posen, and Truly Zac Posen with offerings in handbags, accessories, hosiery, eyewear, fur, and fine jewelry.

Zac Posen serves as a judge with Heidi Klum and Nina Garcia on Lifetime's mainstay Project Runway, now approaching its fourteenth season and most recently, he was announced as Creative Director for the Brooks Brothers signature women's collection and accessories. The first collection will debut in Spring 2016 and will be available worldwide.

Delta Air Lines serves more than 170 million customers each year. Delta was named to FORTUNE magazine's top 50 World's Most Admired Companies in addition to being named the most admired airline for the fourth time in five years. Additionally, Delta has ranked No.1 in the Business Travel News Annual Airline survey for four consecutive years, a first for any airline. With an industry-leading global network, Delta and the Delta Connection carriers offer service to 321 destinations in 58 countries on six continents. Headquartered in Atlanta, Delta employs nearly 80,000 employees worldwide and operates a mainline fleet of more than 700 aircraft. The airline is a founding member of the SkyTeam global alliance and participates in the industry's leading trans-Atlantic joint venture with Air France-KLM and Alitalia as well as a newly formed joint venture with Virgin Atlantic. Including its worldwide alliance partners, Delta offers customers more than 15,000 daily flights, with key hubs and markets including Amsterdam, Atlanta, Boston, Detroit,Los Angeles, Minneapolis/St. Paul, New York-JFK, New York-LaGuardia, Paris-Charles de Gaulle, Salt Lake City, Seattle and Tokyo-Narita. Delta has invested billions of dollars in airport facilities, global products, services and technology to enhance the customer experience in the air and on the ground. Additional information is available on delta.com, Twitter @Delta, Google.com/+Delta, Facebook.com/delta and Delta's blog takingoff.delta.com.