Delta customers and employees celebrated the grand opening of the airline’s second-largest Delta Sky Club today at Atlanta Concourse B. 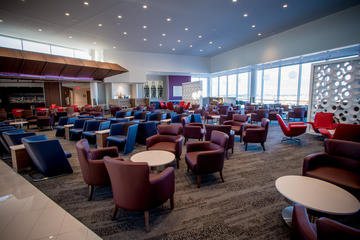 Delta literally put the “sky” in its new Atlanta B Club, as the facility rests above the B Concourse of Hartsfield-Jackson Atlanta International Airport with floor-to-ceiling windows offering a panoramic skyline view that includes downtown Atlanta.

For more than two years, the airline has invested in the Delta Sky Clubs, making them another reason to choose Delta. Atlanta’s B Club represents a renewed thinking behind the airline’s guest experience and features local touches designed to provide a meaningful, inviting environment for Club members and guests, from modern décor seating to locally inspired art, a first-of-its-kind wine wall and premium drink offerings. 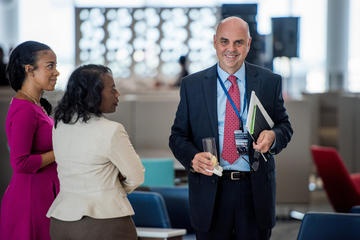 Many features await guests at the Atlanta B Club.

Delta’s Master Sommelier Andrea Robinson curated a wine selection that is featured at a unique wine wall where guests can request a taste, glass or a flight of wines. A wine ambassador will help members and guests sample just what they’re looking for.

THE BAR at Delta Sky Club offers a variety of premium and complimentary options including cocktails, Sweetwater craft beer and Starbucks coffee, freshly brewed or from a state-of-the-art automatic Swiss coffee maker. 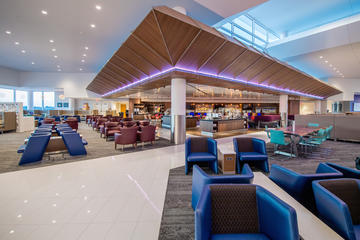 Guests can pair their favorite beverage with complimentary chef-inspired Southern fare. Acclaimed Atlanta Chef Linton Hopkins, who dishes up menus on select Delta flights from Atlanta to Europe, provides locally inspired soups, salads and breads exclusive to the Atlanta B Delta Sky Club. Additional menu items include pasta and rice salads, corn and blueberry muffins, rye rolls and soup toppings, including crispy chickpeas, coconut shavings and croutons. For breakfast, guests can enjoy locally baked bagels, hard boiled eggs and a yogurt bar with toppings, while fruit and snacks are offered throughout the day.

THE GALLERY, a feature of art that greets guests along the walk into the Club, will showcase inspiring work from emerging artists and local galleries. Inside the Club are a number of local inspired pieces, including a texture-patterned Wright Brothers mural by Atlanta-based artist Alexi Torres.

Guests have power outlets near every seat and Wi-Fi throughout the space, as well as TVs, magazines, and quiet work areas.

Construction for the Atlanta B Delta Sky Club began in late 2015, and the facility is a freestanding structure uniquely suspended over the tarmac by 455 tons of steel trusses, beams and cantilevers. 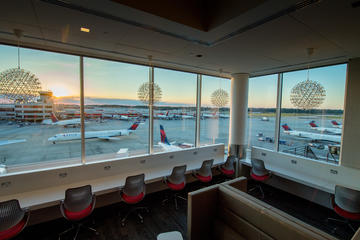 At opening, the Club offers almost 25,000 square feet of open-floored space, second in size only to New York – JFK’s T4 facility. Located on Concourse B near Gate B18, the space has a seating capacity of more than 500 and is expected to be the busiest Club in the entire Delta system.

Hundreds of guests packed the Club this morning.

Jack Liberty, who was flying to St. Louis for a wedding, was enthusiastic. “This is the nicest club I’ve been in. It’s such a great space – big and open. And the food is very fresh. I’m enjoying the breakfast selections, especially the fruit and quiche.”

Justin Barker, who was connecting in Atlanta on his way home to Daytona Beach, said, “As a frequent flyer, I want to relax when I come into the Sky Clubs. This club truly has every amenity you could want – good food, lots of places to power up, WiFi, etc.”

With the opening of the Atlanta B Club, Delta will close its other two Clubs near gates B10 and B25. Delta operates a total of nine Clubs in the Atlanta airport and 50 around the world. 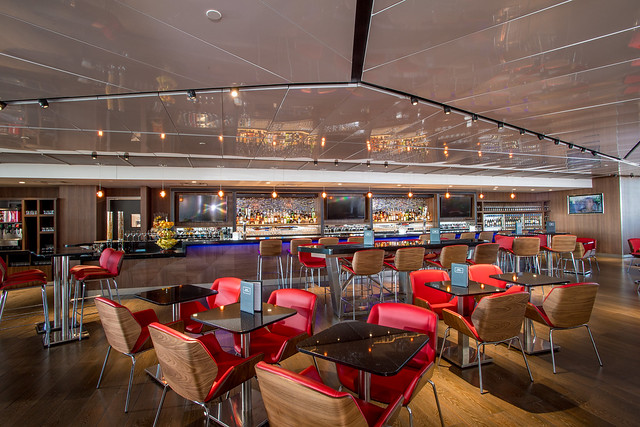