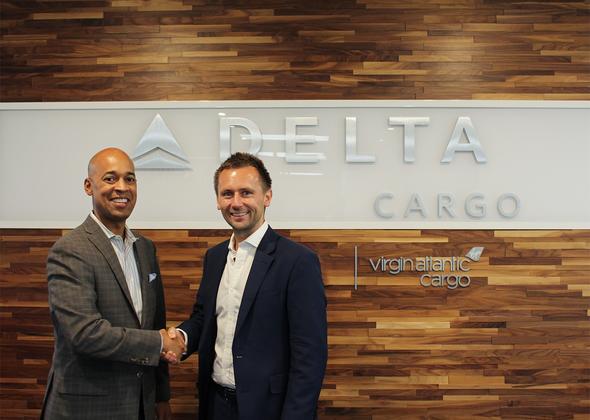 Virgin Atlantic Cargo and Delta Cargo are promising customers more choice and reach, as well as the service benefits of greater automation as their trans-Atlantic joint venture partnership celebrates its fifth anniversary.

The airlines’ commitment to build the leading trans-Atlantic partnership has already increased customers’ access to major cities in the U.K. and North America, with a 20 percent rise in the number of Delta and Virgin Atlantic flights since the joint venture began. Customers now have a choice of 74 daily flights serving 28 routes between the U.K. and U.S., which in 2018 carried over a quarter of total trans-Atlantic air cargo volumes.

“Our long-term cargo strategy is to build an unmatched trans-Atlantic partnership with our joint venture partner, Virgin Atlantic. We are focused on finding ways to work more closely, collaborate and share information – ensuring we are doing all we can to support our customers on both sides of the Atlantic,” said Shawn Cole, Vice President — Cargo. “The original deal was a game changer for Delta transforming our ability to compete on trans-Atlantic routes with access to London Heathrow as much as providing Virgin Atlantic unparalleled access to Delta’s U.S. network.”

2019 is shaping up to be another exciting year for Delta and Virgin Atlantic, building on their successes of being the most on-time partnership to North America at London Heathrow; moving into a new state-of-the-art warehouse at London Heathrow later in the year; plus a focus on digitization and ensuring transparency throughout the shipment journey. Delta is adding a new nonstop service from Edinburgh to Boston, while Virgin Atlantic has scheduled another flight to Boston from London Heathrow, bringing the frequency to four a day. Virgin Atlantic is also adding more flying between Manchester and the U.S. with new nonstop service to Los Angeles and increased frequencies to Las Vegas and New York.

Dominic Kennedy, Managing Director of Virgin Atlantic Cargo, commented: “Our intention has always been to ensure that whatever we do as a joint venture, it must deliver real benefits for our customers in terms of more choice, service quality and being easier to do business with. We are very excited about what more we can achieve as a cargo JV and have been inspired by the great relationship and mutual respect between our cargo teams. Our partnership benefits and strengthens our respective cargo businesses, leverages the best of both airlines, and, ultimately, will continue to offer new opportunities for our customers as we move forward together.”

For further information on the airlines log onto deltacargo.com and virginatlanticcargo.com.