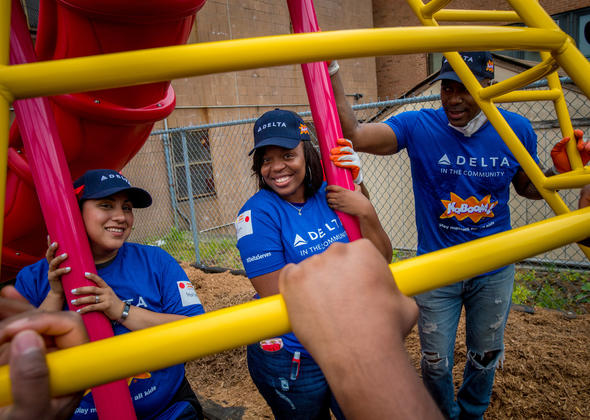 Rain or shine, nothing could stop the 250 dedicated volunteers from Delta, KaBOOM!, and the community of New York’s Springfield Gardens on Saturday, who together built a new playground for the children of Merrick Academy Charter School in Queens. Based on the imaginative designs of the community’s own children, this playground marks the 23rd since Delta began its partnership with KaBOOM! in 2013 – and the second in New York.

“It’s so important for the team at Delta to give back to the community that we both work and play in,” said Chuck Imhof, Vice President – New York and Sales, East. “Working with an organization such as KaBOOM! and seeing the unbelievable things that they can accomplish, we simply can’t thank these volunteers enough.”

Merrick Academy has been without an age-appropriate playground since its move to Springfield Gardens in 2003; with this new addition, more than 600 kids in the community will have a fun and safe place to play.

“Ever since I got the first flyer with the news, I knew I had to help,” noted one first-time volunteer and current parent of a third-grader at Merrick Academy. “Everyone was so excited and focused throughout the build – we just want to give our kids a better place to be a kid.”

At the afternoon’s ribbon-cutting ceremony Stephanie Baldwin, VP of Airport Operations at JFK, presented Merrick Academy with a surprise $10,000 donation to be used toward the maintenance of the playground.   Baldwin was joined by New York State Senator Leroy Comrie and Councilman Donovan Richards to celebrate the new playground to the community.

KaBOOM! is the national non-profit dedicated to giving all kids – especially those living in poverty – the childhood they deserve through great, safe places to play. The organization has collaborated with partners to build or improve more than 17,000 playspaces, engaged more than 1.5 million volunteers and served over 9 million kids.

This year alone Delta will complete six KaBOOM! playgrounds. A playground in Los Angeles was completed in February followed by a build in May in Miami. Future builds in 2018 will take place in Atlanta, Salt Lake City, and Washington, DC. More information about these builds, including how to sign up to participate, will be posted on Deltanet in the coming weeks.