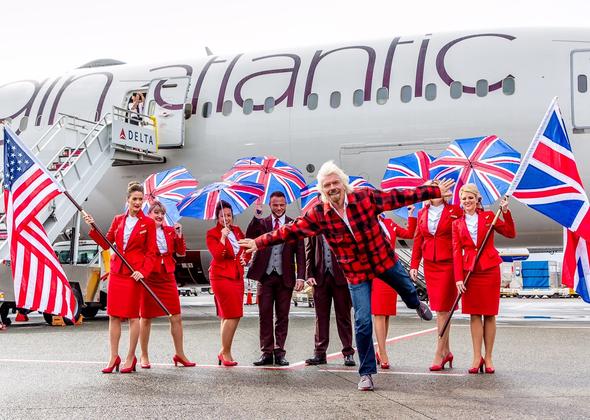 Virgin Atlantic now operates Boeing 787-9 Dreamliner service from Seattle to London, replacing the flight previously operated by Delta and adding more than 40,000 extra seats each year in addition to Premium Economy service. Delta, in turn, is using its aircraft to begin Portland-London service in May. Delta has also taken over Virgin’s Detroit-London flight and will operate 10 weekly flights between the two cities.

Delta and Virgin Atlantic’s joint venture partnership strengthens both airlines by allowing them to pair the right aircraft and product with the right markets, all while bringing to life their shared vision of excellence in customer experience.

John Caldwell, Delta’s Vice President – Seattle, joined Branson and other Virgin Atlantic and Port of Seattle executives for the celebration Monday attended by local and U.K. media, during which Caldwell, Branson and Kreeger spoke about the joint venture, Virgin’s new flight and Delta’s growth in Seattle.

This summer, the airlines will make further enhancements to their joint schedule at London-Heathrow. In addition to Delta’s Portland-London service beginning in May, Virgin Atlantic will launch a third daily flight between Los Angeles and London, and Delta will begin service between New York-JFK and Glasgow, Scotland.

This summer, Delta and Virgin will operate 39 trans-Atlantic flights per day from 26 destinations in North America to five airports in the U.K., including nine flights each day between New York and London.