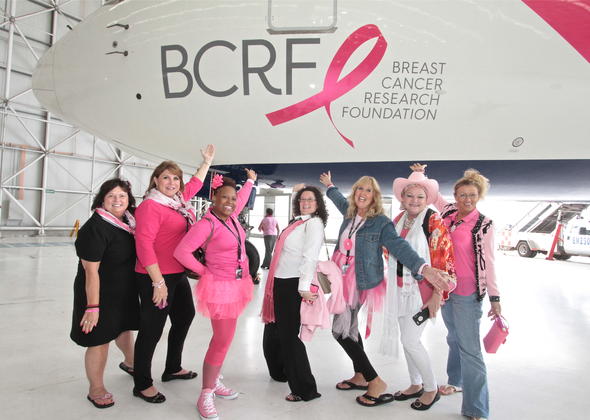 “The work we do with BCRF each year has one goal – eradicating breast cancer. This partnership stems from our commitment to not only support each other, but also the communities where we live, work and serve each day,” said Allison Ausband, Delta’s Senior Vice President of In-Flight Service. “With the help of our employees, customers and community partners we will continue to work together to create a better tomorrow.” 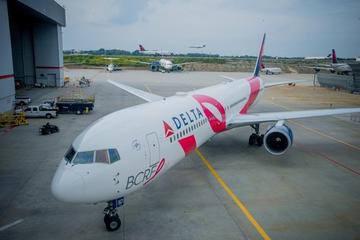 For the third year in a row, Delta customers will also join the flight. Delta recently held a SkyMiles Experiences online auction, where three customers donated a total of 205,001 miles, which will go directly toward BCRF and its efforts. The three customers, each with a guest of their choice, will also be a part of the flight.

“As a global leader, Delta’s commitment has been instrumental in advancing BCRF’s mission to be the end of breast cancer,” said Myra Biblowit, President of BCRF. “Delta’s dedication is deeply personal—underscored by the passion of their employees and customers. In joining forces with the highest rated breast cancer organization in the country and the largest private funder of research in the world, we are confident that, together, we will consign breast cancer to the history books.” 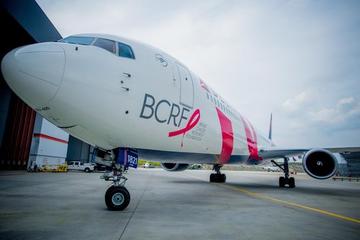 Delta employees, customers and their friends and families have raised $11 million for BCRF since 2005, including last year’s efforts of $1.75 million. The collective contributions have funded the vital work of 44 different research projects over the years in the pursuit of eradicating breast cancer.

To further raise awareness and support for breast cancer research, Delta employees will wear pink uniforms and sell pink products, including pink lemonade and pink headsets, on board and in Delta Sky Clubs throughout the month of October.

Additional information, including how to donate, is available on delta.com/bcrf.

Delta offers the most seats of any airline between New York’s JFK and Los Angeles and San Francisco and is the only carrier to operate widebody service on both routes. The airline has also made several investments both in the air and on the ground to enhance the experience for customers. In Los Angeles, Delta will soon embark upon a relocation to Terminals 2 and 3 at LAX, taking steps toward a $1.9 billion plan to create a premier partner hub that offers best-in-class check-in, seamless connectivity and an industry-leading customer experience. In the meantime, Delta’s LAX customers continue to enjoy its recent $229 million facilities investment at Terminal 5, including a newly remodeled Delta Sky Club and a brand new premium check-in experience, Delta ONE at LAX. In New York, Delta customers at JFK travel through a $1.4 billion, state-of-the-art international gateway at Terminal 4, which opened in 2013. A new Delta Sky Club in San Francisco opened last summer.

Once onboard, all cross-country flights between JFK and LAX and SFO offer the premium cabin Delta One, with full flat-bed seats and a suite of other amenities, including TUMI amenity kits, featuring Kiehl’s Since 1851 products, and wines selected by Master Sommelier Andrea Robinson. To commemorate the airline’s BCRF campaign, Delta partnered with TUMI to create a unique BCRF amenity kit to help generate awareness. The kits will be offered on Delta One flights out of the U.S. and flights between JFK and LAX and SFO. Customers traveling from JFK to LAX are also able to enjoy hand-crafted, seasonally rotating meals from Union Square Hospitality Group’s North End Grill.

In 2012, Delta’s international Boeing 767-400ER was formally dedicated to the memory of Evelyn Lauder who founded the Breast Cancer Research Foundation in 1993. The aircraft flies international routes and will raise awareness for BCRF around the world this year. Delta's first pink plane was a Boeing 757 that flew between 2005 and 2010 throughout the United States, Latin America and the Caribbean to generate awareness for the cause.

Related: Turning 767 into 'Pink Plane' a labor of love

About the Breast Cancer Research Foundation

The Breast Cancer Research Foundation (BCRF) is dedicated to being the end of breast cancer by advancing the world's most promising research. Founded by Evelyn H. Lauder in 1993, BCRF-funded investigators have been deeply involved in every major breakthrough in breast cancer prevention, diagnosis, treatment and survivorship. This year, BCRF will award $57 million to support the work of more than 250 scientists at leading medical and academic institutions across 14 countries, making BCRF the largest private funder of breast cancer research worldwide. By committing 91 cents of every dollar directly to its mission, BCRF is one of the nation's most fiscally responsible nonprofits. BCRF is the only breast cancer organization in the US with an "A+" from CharityWatch and has been awarded Charity Navigator’s highest rating of four stars 14 times since 2002. Visit http://www.bcrfcure.org/ to learn more.