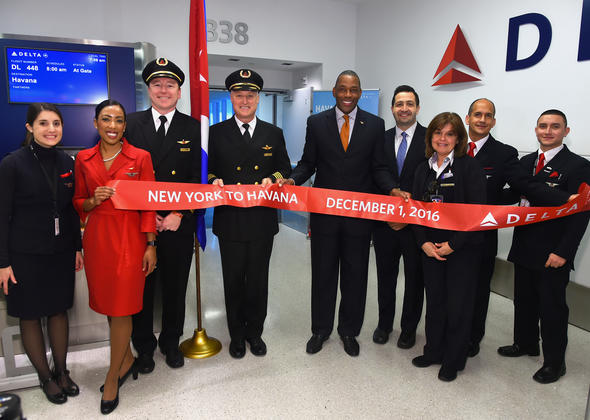 NEW YORK - Flight 448 from New York-JFK is scheduled to arrive in Havana just before noon after an on-time departure into sunny skies over Long Island early this morning. It was Delta's first regularly scheduled flight to depart from the U.S. to Cuba in 55 years.

Delta's Henry Kuykendall, Vice President-New York, and Hussein Berry, Vice President - Airport Operations, JFK, joined enthusiastic customers and employees for a pre-flight celebration in Terminal 4 that kicked off just after dawn. Delta celebrated the service launch with a spread of Cuban food and gifts for passengers. 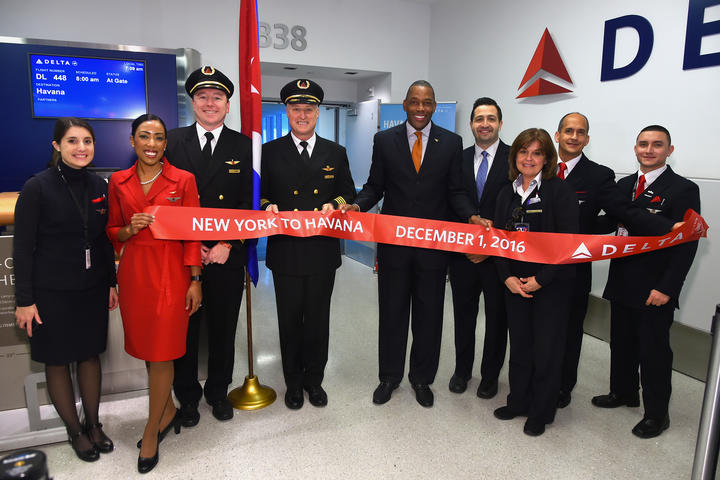 "The addition of Havana to Delta's international portfolio at JFK speaks to the strength of our position in this market, and we look forward to bringing our industry-leading operational performance, service, and products to Cuba from New York," said Kuykendall.

Delta's new service from New York links the second-largest Cuban-American population to Havana and adds to the 13 year-round Latin American and Caribbean destinations the airline already serves from JFK.

"This latest milestone is further proof our partnership with Cuba continues to drive economic growth and advance opportunity for New Yorkers," said New York Gov. Andrew Cuomo. "Delta's inaugural flight to Cuba will build on the progress we have achieved, while strengthening economic ties as our two nations enter a new era of cooperation, progress and innovation."

Crew members and passengers alike shared unique stories of their connections to Cuba. Rafael Katz, a customer from Brooklyn, N.Y., was born in Cuba, moved to the United States as a child, and hasn't been back since 2003. He said he was looking forward to visiting family in Havana. Another customer was planning to spend the next three weeks at one of Havana's world-famous boxing gyms, known for training multiple Olympic boxers. "I'm not sure I'd describe this trip as 'fun,'" he said. "I'm pretty sure I'm going to get my (butt) kicked."

Atlanta-based Flight Attendant Gisselle S. was born in Cuba in 1984. Ten years later, amid an escalating economic crisis in the country, her stepfather built a boat in her family's backyard, powered it with the engine from his car, and fled the country. Gisselle and her family were rescued by the U.S. Coast Guard and spent four months in refugee camps before arriving in the United States.

Today's launch date is especially significant for her, as Dec. 1 also marks the date of her face-to-face interview with Delta to become a flight attendant in 2010.

"I'm just filled with joy and pride and gratitude today," said Gisselle. "My heart is so full."