Delta is expanding its trans-Atlantic network for summer 2019 with new routes plus additional frequencies. The airline will launch its first nonstop flight from Tampa Bay, Fla., to Amsterdam, Netherlands. The year-round service, which launches on May 23, will be Delta’s 11th Amsterdam route from the U.S. and second from Florida, following the launch of its Orlando service earlier this year.

Meanwhile, Delta is also expanding its hub-to-hub flying between the United States and Europe with services from Los Angeles International Airport to both Amsterdam and Paris Charles de Gaulle increasing to daily operations beginning June 16, 2019.

“Delta is putting great focus on our international expansion and Europe is an important part of this,” said Roberto Ioriatti, Delta’s Vice President — Trans-Atlantic. “Our new Tampa Bay flight and extra capacity on other key routes from our LAX and JFK hubs offer our customers more choice and convenient connections throughout the United States and Europe in connection with our partners.”

The LA to Paris service will be the third route to the French capital to be operated using the upgraded Boeing 777 aircraft, featuring the Delta One suites and Delta Premium Select. The two new cabins will feature on select flights from Atlanta and Minneapolis effective Dec. 13. Paris is also the second European hub where customers can enjoy Delta’s new products, after their debut on the airline’s flagship A350-900 aircraft on the Detroit to Amsterdam route. All flights between the U.S. and mainland Europe are operated in conjunction with joint venture partners Air France, KLM and Alitalia.

Capacity from New York-JFK will also grow next summer with the launch of a second daily nonstop flight to both Paris and Tel Aviv, Israel. For Paris, the additional flight brings the total number in conjunction with Air France, KLM and Alitalia to seven a day. The Tel Aviv service, meanwhile, has been timed as a daytime departure from Tel Aviv, completing the existing night-time departure to offer customers more choice. Both flights will be operated using A330-300 aircraft on the route, with flat-bed seats in the Delta One business class cabin. Delta has also recently upgraded its Main Cabin meal service to provide a restaurant-style dining experience in the sky complete with menu card and full drinks selection.

Delta’s nonstop flight between Tampa Bay and Amsterdam is scheduled as follows:

Delta’s nonstop flight between Los Angeles and Amsterdam is scheduled as follows:

Delta’s nonstop flight between Los Angeles and Paris is scheduled as follows:

All aircraft operating on these routes are equipped with Gogo Ku Wi-Fi connectivity and customers will have access to free mobile messaging while on board through iMessage, WhatsApp and Facebook Messenger. Meanwhile, full-spectrum LED ambient lighting offers customized lighting schemes depending on phase of flight.

Delta’s 2018 summer seasonal trans-Atlantic flying from its New York-JFK hub is planned to return, including the only U.S. carrier nonstop service from JFK to the Azores, Edinburgh, Glasgow, and Berlin. 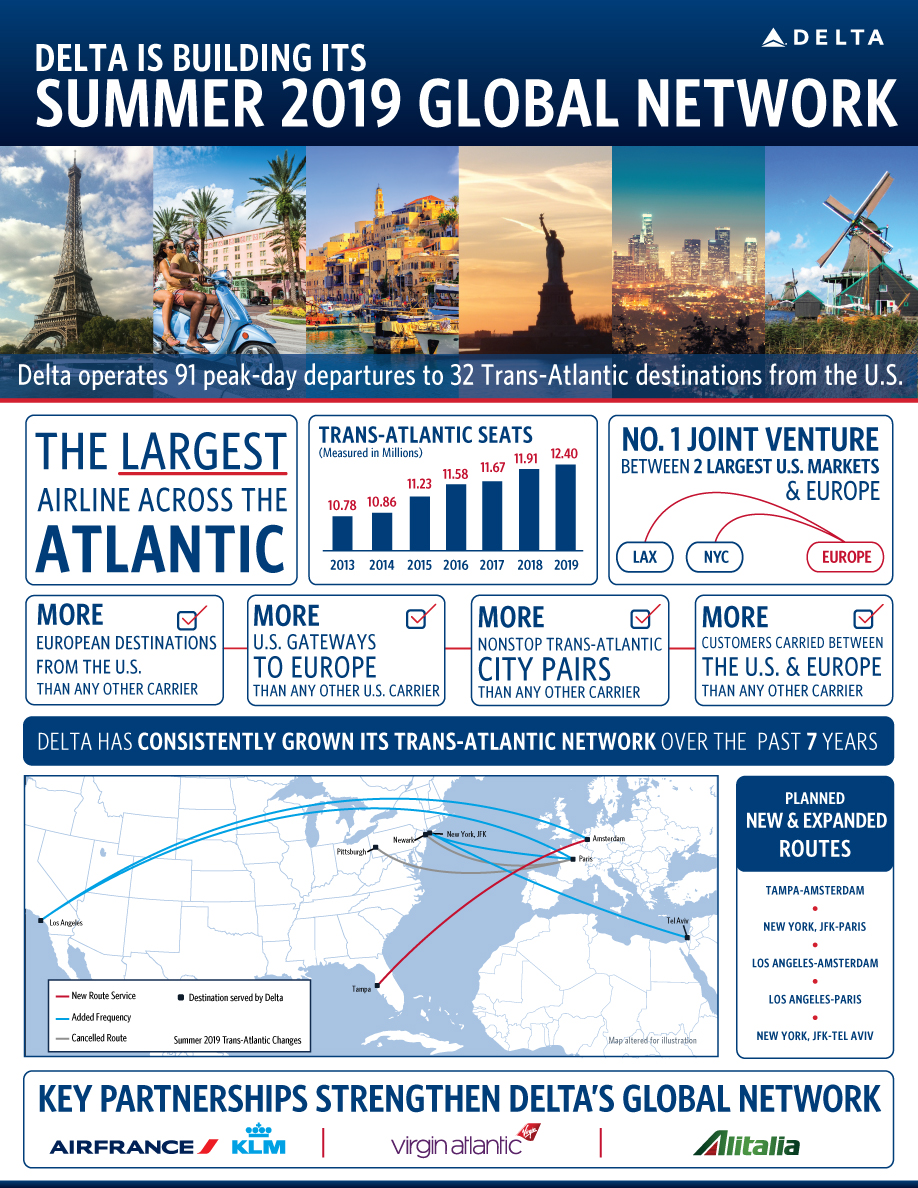