Delta’s relocation to LAX Terminals 2 and 3 begins evening of Friday, May 12

Delta Air Lines’ relocation to Terminals 2 and 3 from Terminals 5 and 6 at Los Angeles International Airport begins the evening of Friday, May 12, and is expected to be complete in the early morning hours of Wednesday, May 17. When complete, Delta and Los Angeles World Airports (LAWA) will have orchestrated one of the largest terminal moves in the history of commercial aviation. Customers traveling during the move should plan ahead. 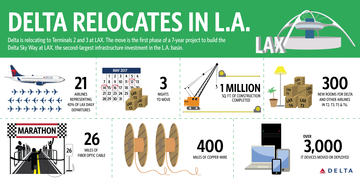 The relocation will impact 15 airlines during the one-week move period, and 21 airlines total will move to different terminals. The move is a precursor to the Delta Sky Way at LAX, Delta’s $1.9 billion plan to modernize, upgrade and connect Terminals 2, 3 and the Tom Bradley International Terminal (TBIT) at LAX over the next seven years.

“Our future in Los Angeles is bright with our $1.9 billion plan for the Delta Sky Way at LAX, an unprecedented public-private partnership through which Delta will undertake the second largest private infrastructure project in the LA basin and completely redevelop Terminals 2 and 3,” said Ranjan Goswami, Delta’s Vice President – Sales, West. “But first, we have to move into our new home. Delta has planned for this move for nearly a year, and I’m confident that our team will make this as smooth as possible for our customers. But we also need our customers to be prepared if they are traveling during the relocation.”

“The ‘LAX on the MOVE’ team is continuing to plan, counting down to May 12,” said Los Angeles Board of Airport Commissioners President Sean Burton. “When the Board approved a new lease and license agreement for Delta Air Lines last summer, chief among our priorities was improving the guest experience at LAX. Delta’s plans for Terminals 2 and 3 fit this vision, and bring us one step closer to the LAX of tomorrow.”

“It all comes down to our guests being informed and taking the necessary actions to make sure they are in the right place at the right time to catch their flights,” said LAWA Chief Executive Officer Deborah Flint. “During the relocation and in the weeks following, passengers are advised to check in online, print or download boarding passes, and check terminal and gate information before coming to LAX. They should also arrive to the airport earlier than normal. Once at LAX, passengers should check flight and gate status on flight information display boards in each terminal to ensure they are in the correct location.”

Delta’s relocation to Terminals 2 and 3 required an extensive construction effort, which included building new baggage systems and offices, employee lounge areas, ramp offices and IT systems for all of the airlines moving into Terminals 5 and 6 and for Delta’s new space in Terminals 2 and 3.

The relocation will begin the evening of Friday, May 12, and will continue with additional overnight moves on May 14 and May 16, with a scheduled completion of May 17. On certain days of the move, Delta will operate out of as many as four terminals: 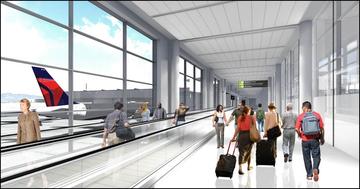 Customers are strongly encouraged to take the following actions to avoid disruptions to their travel plans:

Delta will communicate frequently with customers, providing real-time information on departure and arrival terminals and gates through the Fly Delta app, text messages, emails, post cards for connecting passengers and additional channels. Additionally, Delta released the latest version of the Fly Delta app earlier this year, featuring a completely interactive and integrated wayfinder map for LAX. LAWA will update terminal information in real time at www.laxishappening.com and through social media using the hashtag #LAXontheMove. Digital signage will be continuously updated inside and outside the terminals, and shuttles will be provided to move passengers that arrive at the wrong terminals to the correct locations to make their flights.

Delta and LAWA have implemented a robust informational campaign and have been communicating with customers, employees, ground transportation operators, other airlines, and the public for several months leading up to the move through many channels, including mass advertising, targeted customer emails, customer and partner town halls, and media coverage. Delta is also working closely with ground transportation operators and rideshare services to ensure drivers are aware of the move and has created digital banners for Waze to remind customers to check their terminal on the Fly Delta app. Learn more at www.delta.com/skywayatlax.

Customers Offered a Moment of Relaxation

Delta will give customers impacted by the move a moment of relaxation post-security through complimentary, mini spa-like experiences, including:

The spa pop-ups will be available in Terminal 5 from May 13-16, Terminal 3 from May 13-17 and Terminal 2 on May 17 from 8 a.m. – 1 p.m. Kind bars and Pressed Juicery mini juices will be at Terminals 2, 3, 5 and 6 for all days of the move. The lavender diffusers and Biscoff cookies will also be available for all days of the move. LAWA will also have dogs at the airport to provide stress relief and comfort to passengers through their Pets Unstressing Passengers (PUPs) program.

Delta Sky Clubs Will Be Available Throughout Move Week

Delta will have access to 23 gates at LAX immediately following the move and will operate alongside many of its airline partners, including Aeromexico, Virgin Atlantic and WestJet. Later, a secure connection to TBIT will enable seamless access to additional partners, including Air France-KLM, Alitalia, China Eastern, China Southern, Korean Air and Virgin Australia. When completed, the new space will provide all the amenities Delta’s customers have come to expect at LAX, including a private Delta One check-in lounge, new state-of-the-art Delta Sky Clubs, an integrated in-line baggage system, convenient passenger flows, more gate-area seating, and a world-class concession program featuring local chefs and restaurants in partnership with Westfield Corporation.

LAWA’s Board of Airport Commissioners approved a terminal facilities lease and license agreement in July 2016 and the Los Angeles City Council unanimously approved in August to enable Delta’s relocation to Terminals 2 and 3.

Delta has invested billions of dollars in products, services and technology to enhance the customer experience, including massive investments in airport infrastructure across its network. These investments include more than $7 billion in airport projects since 2006, and along with its airport partners Delta will be involved in an additional $12 billion worth of facilities infrastructure projects in coming years, including improvements at several of its key hubs in Atlanta, Los Angeles, New York, Salt Lake City and Seattle.

Since 2009, Delta has been the fastest-growing carrier at LAX, and the LAX relocation will create a better experience for customers by giving Delta access to more gates, thereby easing ramp and gate congestion, and allowing Delta to co-locate with its airline partners. In April, the airline launched daily nonstop service to Washington–Reagan Airport – becoming the only airline to offer flat-bed seats in the front cabin on that route – and Delta’s joint venture partner Virgin Australia began service five days per week to Melbourne on a Boeing 777-300ER. Virgin Atlantic will launch a third daily round-trip flight on a Boeing 787-9 between LAX and London-Heathrow beginning this summer. In 2016, the airline launched five daily flights from LAX to Denver International Airport, a key route for business travelers in Los Angeles; expanded the Delta Shuttle to include Los Angeles-Seattle and Seattle-San Francisco in addition to Los Angeles-San Francisco; increased service to both New York-JFK and Seattle to 10 daily flights; added a third daily flight to Boston; and launched Aspen service in December. Delta offers more flights between Los Angeles and New York than any other carrier.

Delta’s 4,000 LA-based employees are deeply integrated into the community, working with dozens of organizations and supporting causes that are near and dear to the hearts of Angelenos, including AIDS Walk Los Angeles, Children’s Hospital Los Angeles, Covenant House California, Habitat for Humanity of Greater Los Angeles, Junior Achievement of Southern California, KaBOOM!, LA Regional Food Bank, and The Motion Picture and Television Fund, among many others.