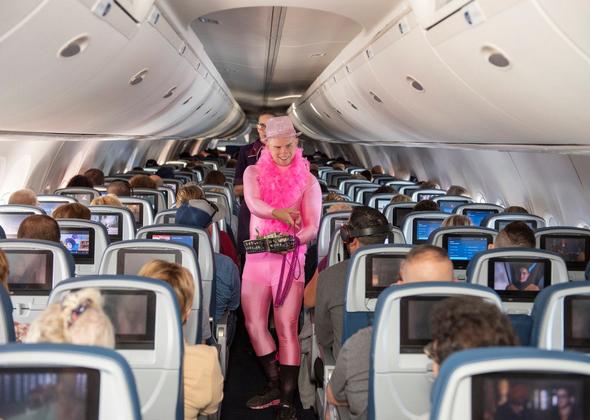 Throughout October, Delta customers and employees worldwide join forces to raise money for the Breast Cancer Research Foundation through local fundraisers, onboard products and a dash of creativity. Last week, one of our frequent fliers took part in his third-annual Pink Man Flight, where he executed his simple yet effective mission: Raise money for BCRF while sporting pink from head to toe.

Since his partnership with the airline which began in 2016, the Pink Man has now raised more than $20,000 on Delta flights and in airports around the globe.

Andrew Dean’s passion for the cause was inspired by his mother, a 14-year breast cancer survivor.

"Being able to share my family's story is always a powerful experience," said Dean, a Delta frequent flier and Omaha business owner. "And the costume is designed to get reactions and make people question what I'm doing – it's part of the fun! People ask me if I lost a bet or how much I'm being paid to do this, but as soon as I step on the plane and share my mission, everyone gets behind it." 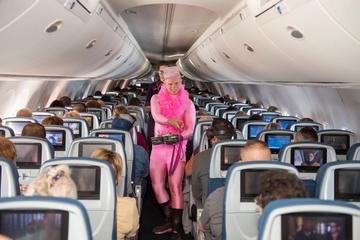 This year, the Pink Man's journey began at home in Omaha, where the gate area was decked out in pink. Dean welcomed Detroit-bound customers, and once on board the Boeing 757 he made a special PA announcement to explain his mission.

He walked the aisle taking pictures with customers and accepting cash donations in exchange for pink necklaces. He even assisted flight attendants by passing out snacks and drinks to his generous supporters.

The Pink Man's mission wasn't final in Detroit, however. Next, Dean headed south to Orlando, where he raised $1,081 on board, then a short hop to Atlanta, where Dean raised more than $700 in just 75 minutes.

A final flight to Louisville ended the 20-hour fundraiser, bringing his total donation amount in the air and on the ground to a whopping $5,888.

2019 marked Dean's third year of partnership with Delta, and after a long, fulfilling day of selfies and smiles, Dean brought his total BCRF donation amount as Pink Man to $20,500. 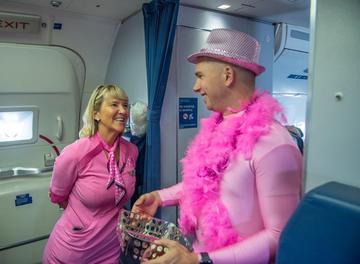 The Pink Man's wardrobe made its debut at a local 5K race to raise money for breast cancer research. When he heard about Delta's partnership with BCRF, he decided to take his efforts from the pavement to the skies – making meaningful connections all along the way.

"Delta has truly become my travel family," said Dean, who owns a photography business. "As someone who spends between 250 and 300 days a year on the road, a familiar face or friendly smile is something I look forward to. Over the years, I've made friends with employees at Sky Clubs across the country as well as countless ticket agents, gate agents and flight attendants."

Dean encourages supporters to track his journey and Delta partnership using #PinkManFlight on Facebook, Instagram and Twitter. "While I may be the guy in the Pink Man costume, these fundraisers would not be able to make the impact they do without the support of the thousands of Delta employees, passengers, friends and family that get behind them and support them."

BCRF is a nonprofit organization providing critical funding for cancer research. Since 2005, Delta has raised $16.8 million and counting for BCRF thanks to the support from employees and customers worldwide.