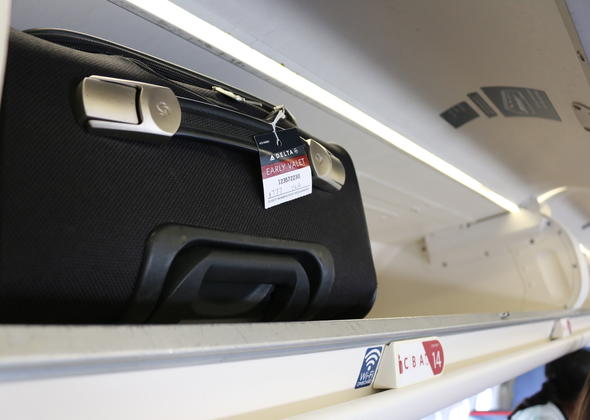 Delta launched a special service this summer to improve the customer experience when boarding.

Delta’s Early Valet is a surprise-and-delight service in which Airport Customer Service gate agents preload customers’ carry-on luggage into the overhead bins above their assigned seats. The bags are tagged and labeled with the customer’s seat assignment.

The idea came to Alan Janbay, Delta’s Project Leader – Airport Customer Service Field Support, when he watched a mother load her bag in the overhead bin on a flight to Baltimore in 2014.

“She struggled with placing her roller board in the overhead bin for some time before a fellow passenger and I assisted,” he said. “I thought, ‘We should have a service for that.’ I immediately emailed my leadership team with the idea and the rest is history.”

“This program really is one of the best things an airline has done in a very long time.” - Michael V., Delta customer.

Testing for Early Valet began last summer at Los Angeles International Airport and later in Atlanta. After data revealed faster boarding and an improved customer experience, the program was introduced at all of Delta’s domestic hubs, including Atlanta, Seattle, Minneapolis/St. Paul and New York-JFK, on June 1.

The program, which is available on Delta’s narrow-body aircraft on select routes, targets families traveling with small children, customers with disabilities, elderly travelers and high value customers. It has proven to shave one-and-a-half minutes from the average boarding time as between six to nine bags are typically retrieved and loaded approximately 45 minutes before departure.

“Our goal is to transform the gate experience from a ‘hold room’ to a friendly and interactive space where Early Valet agents engage with customers, welcoming and assisting them on the spot,” Janbay said.

Customer reaction to Early Valet has been positive as customer satisfaction scores increased up to 8 percent on the targeted flights compared to those that did not receive the service.

“This program really is one of the best things an airline has done in a very long time,” said Michael V., a Delta customer. “I fly a lot and not having to worry about finding a spot in the overhead bin is pretty cool and makes traveling that much easier."