Delta CEO Ed Bastian was honored with the Herman J. Russell CEO of the Year Award by the Atlanta Business League (ABL) Tuesday, recognized for his commitment to the community and his role in supporting minority businesses and entrepreneurs. 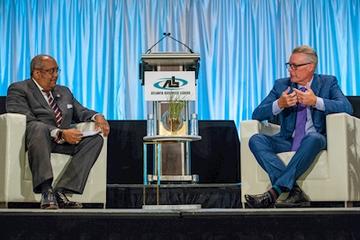 “This is a great honor, but it’s really about the Delta people, and I’m accepting it on their behalf,” he said. “Running an airline is the ultimate team sport, and we have the best team in the business.”

At the luncheon, Bastian also announced a $500,000 sponsorship over the next five years to support a new Business League program that will be launched later this year, titled Taking Your Business to the Next Level. The new program is designed to help African American entrepreneurs grow their businesses.

As part of its annual giving, Delta is committed to invest one percent of its net income into the communities where employees live, work and serve. The airline’s giving is guided by its key pillars of education, global health and wellness, and supporting armed service members and veterans. In 2017, the airline invested more than $45 million into worldwide communities.

The Atlanta Business League is the South’s oldest and most influential minority business development and advocacy organization. The award presented to Bastian is named after Herman J. Russell, a trailblazing Atlanta entrepreneur who built one of the nation’s most profitable minority-owned businesses, a construction and real estate firm that built many of the buildings on Delta’s Atlanta campus as well as at Hartsfield-Jackson Atlanta International Airport.

“It’s fitting that Delta is winning this honor named after Herman Russell, given that his work has had such a big impact on our home here in Atlanta,” Bastian said. 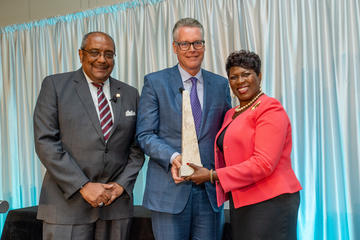 Milton Jones, the ABL’s board chairman, presented the award to Bastian, noting that “the CEO of the Year Award is the most prestigious recognition given to a CEO by the ABL and recognizes the true measure of a CEO’s success –commitment and fairness to people –while maximizing shareholder profits. In today’s world that is very challenging.”

The award was accompanied by a video tribute that included personal testimonies from Dan Cathy, CEO of Chick-fil-A, Hala Moddelmog, CEO of the Metro Atlanta Chamber, Ambassador and former board member Andrew Young, and baseball great Henry (Hank) Aaron.

“We are thrilled that Delta Air Lines has chosen to underwrite the Atlanta Business League’s Taking Your Business to the Next Level initiative, which will develop and strengthen more African American businesses in the community,” said Leona Barr-Davenport, President and CEO, Atlanta Business League. “Delta has been a partner of the ABL each step of the way, which is why we were so honored to award Ed with the Herman J. Russell CEO of the Year Award.”

Delta has been a longstanding supporter of the ABL. In 2012, at this same annual CEO Luncheon, Delta launched a matching gift fund and raised $250,000 in an hour to pay off the ABL’s mortgage, to secure its future on the Westside.