Employee and his brother to pull 167,000-pound Delta jet in memory of their mom

When the Delta Jet Drag began eight years ago, Robert Cisneros signed up to pull that 167,000 pound plane. At first, participating in the fundraiser was just a way to support friends, coworkers and loved ones battling cancer. Then, when his mother was diagnosed, that passion turned into something more: commitment. 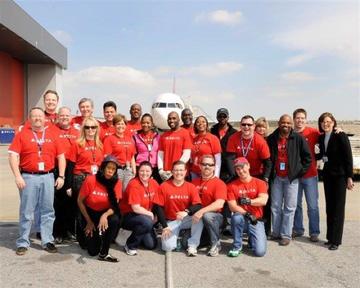 “It all started when my team made it a goal to get more involved in our community,” said Cisneros, an Atlanta-based Field Service Manager – In-Flight Service. “But it took a turn for me in March 2013 when my mom passed away from brain cancer. Several months before, she had made it a goal to attend the Jet Drag.”

His mom passed away two months before the event, but she made him promise that he wouldn’t stop pulling that plane.

Cisneros will double down on that promise May 5 at the airline’s eighth annual Jet Drag, where thousands of Delta employees will compete in teams of 20 to pull a Boeing 757 jet 20 feet in the fastest time, all to raise money for the American Cancer Society.

Each team raises or donates $1,500 to participate, contributing to Delta’s goal of raising $2.25 million to fund cancer research, patient service programs and advocacy for the Society. The effort is part of Delta’s focus on giving back to the communities where employees live and serve. 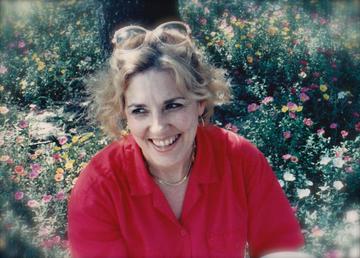 This year’s Jet Drag will be particularly special for Cisneros because his brother, Ron, is flying in from San Antonio to pull on his team, the IFS Wacky Widgets, in memory of their mom, Loida.

“All these years, my brother has seen photos of the Jet Drag on Facebook. I told him about how when you’re pulling that plane, it takes every bit of strength you have, just like when you’re trying to motivate your someone you love to fight,” Cisneros said. “He said to me, ‘We’ve got to do this.’”

Cisneros added that supporting others in the Delta community who are battling cancer or are caregivers is important because that support helped him get through his mom’s diagnosis. Cisneros said his team of more than 100 flight attendants sent his mother cards and gifts to encourage her to keep fighting, and worked his shift before Christmas one year to ensure he had the time with his mom. 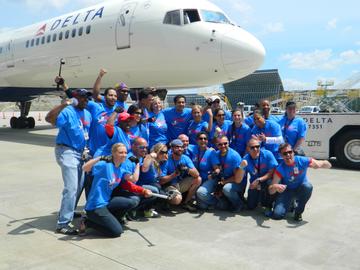 “My brother, sister and I would read the cards to her every night. Some of the flight attendants who had their own fight with cancer would even call her,” he said. “They just made her feel good. She wanted to attend events like the Jet Drag and Delta’s ‘Breast Cancer One’ survivor flight because she wanted to thank those employees for reaching out to her and cheer them on.”

This year, with his brother pulling beside him, Cisneros says he’s going to give it all he’s got.

“It would be great to win, but as long as we raise the money and get to pull that plane, that makes my day,” he said.