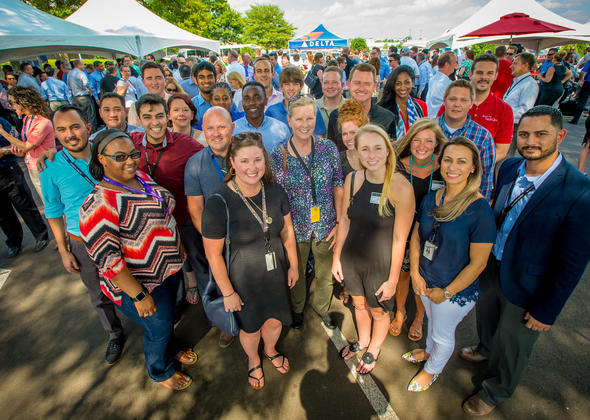 Nearly 600 Delta employees and dependents received academic scholarships Thursday from the Delta Scholarship Fund. The fund, which awarded more than $1 million in scholarships for the 2016-2017 school year, is primarily supported by employee donors and helps Delta people pursue higher education.

But for Delta people, helping one another is nothing new, said Steve Smith, Chair of the employee-led volunteer Scholarship Fund board of directors. “I think the choice to give to the Scholarship Fund is easy for our employees – it’s just part of our culture,” Smith said. “We believe that when we’re helping each other, we’re better as a whole.” The primary source for funding the scholarships is through payroll deductible donations with 14 percent of employees currently enrolled.

Scholarship award announcements kicked off Monday, with leaders worldwide notifying winners within their teams. On Tuesday, Delta CEO Ed Bastian joined in on these celebrations, surprising more than a dozen winners during his visit to Cincinnati.

"You've all earned it," he told the students, noting that the funds for the scholarships were raised by Delta people worldwide. "This is such an important part of who we are, both the scholarships and the Delta Care Fund [a fund that assists employees in need], which reflect our culture."

The top award winner, Ontario-based Ready Reserve agent Dimitra P., was honored with the $10,000 C.E. Woolman Leadership Award to pursue her MBA. In addition, 48 Delta Spirit Awards and 540 Award for Excellence were given. The board awarded scholarships to 24 international winners – the highest number of international scholarships the program has awarded in one year.

“The Delta Scholarship Fund is so important in helping employees and their families achieve their dreams of getting a college degree,” Smith said. “We’re incredibly grateful to our nearly 12,000 donors to help make those dreams possible.”