Employee veteran: ‘For me Delta is family, just like military is family’

This is one of an occasional series on Delta’s veterans, who make up more than 10,000 members of the airline’s workforce of 80,000.

Randall Mann spent 16 years in the U.S. military, serving in Operations Desert Storm and Shield, but two attempts to transition to civilian life left him unsatisfied and lacking a work/life balance. 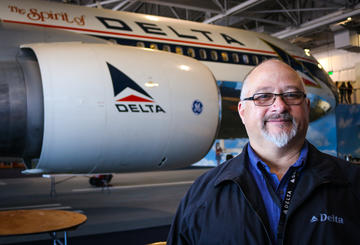 He struggled to find the type of work experience – the camaraderie, the sense of mission – he’d had in the military. Until, that is, a fellow veteran told him about his positive experience working for Delta Air Lines. That was 10 years ago. Mann has worked for Delta ever since, has been promoted to Lead Ground Maintenance Technician, and hasn’t looked back.

“For me Delta is family, just like military is family,” said Mann in a recent interview. “I can honestly say, I do not think my rise in this company would have happened as fast as it did, if it weren't for my military experience, discipline, morals and candor. Those are skills that fit in perfectly at Delta.”

Mann joined the Marines in 1983 as an Anti-Tank Assaultman and Demolitions specialist.  Military life allowed him to see the world but required him to move regularly. He was newly married and wanted to be home more often, so he left the Marines in 1987. He settled in Ohio and began working at a sheet metal plant.

“I worked 364 days that year, 12 and 16 hours a day. I had spent more time with my family in the Marines so I decided to re-enter the military.” This time Mann joined the Army, serving in the Persian Gulf during the Iraq War of 1990-91. He served eight more years and left the military again in 1999. 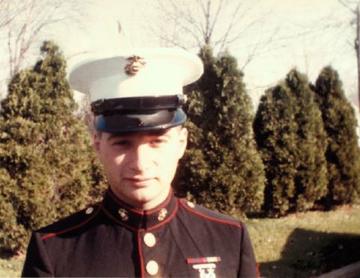 Returning to Ohio, Mann started a business hauling classic cars. But when the gas prices soared, he was forced to close down. That’s when a longtime military friend reached out.  Jeff had started working at Delta and told Mann about an opportunity in the Ground Maintenance Equipment department.  After flying to Atlanta for the interview, Mann was hired immediately.

“I think my military experience is really why I got hired on the spot. When I went into the interview I gave them what I call my ‘Love Me’ book.  I said after you read that, you’re going to love me,” Mann said. The book contained highlights of his military career and awards.  “When you’re in the military, you’re a little more outgoing,” Mann explained.

He started at Delta in 2007 and began working on the automotive equipment passengers see on the tarmac. “I work with some of the best mechanics in the field, and it is an honor to work at Delta Air Lines.”

Mann is gratified by Delta’s commitment to hiring veterans, and thinks the airline is a perfect fit for ex-military. “Veterans have the right moral focus.  We are fair and honest. Our work ethic is unquestionable.  And the same is true of most people at Delta. Delta is without a doubt the best company I have ever worked for.’