Employee: Working for partner airline has been an 'eye-opener'

This is one of an occasional series on Delta employees who participate in global talent exchanges across the airline's network of international alliance partners.​

A year ago, Ilse Janssens packed up her things at Delta’s Brussels office, said a temporary goodbye to her coworkers and embarked on an adventure – an hour across the English Channel to Virgin Atlantic.

Janssens, a Global Account Manager in Sales, EMEA, who has worked for Delta for 15 years, is on a two-year assignment at Virgin Atlantic, Delta’s joint venture partner, as part of the airline’s global talent exchange initiative. The program gives Delta employees a chance to learn from and share best practices with the airline’s alliance partners.

“It’s been great to get to know new people,” Janssens said. “Working for a different organization has given me a new perspective on a lot of things. It’s really been an eye-opener.”

Delta News Hub recently talked with Janssens about why she put herself forward for the role and how she has adjusted to living life as an expat.

DNH: How did you come across the exchange opportunity?

Janssens: Delta entered a joint venture with Virgin Atlantic three years ago, which created a similar opportunity to my previous role. I already had the experience and had expressed interest in job opportunities overseas during my performance reviews, so when the opportunity came up, my manager thought of me.

If you’re interested in this type of experience, you have to let your manager know and make sure your talent profile is up to date. They can’t read your mind and know this is something you want – by speaking up, you can help shape your path and when opportunities arise, your name will be put forward.

DNH: What were your expectations going into the new country?

Janssens: I knew London relatively well already, but I found that the pace was faster here than in Brussels. Not just professionally, but day-to-day things as one might expect living in a large city – transport links are very good but the commute is much busier than back home. I’m into the second year of my two-year assignment, and London has actually exceeded my expectations. I could definitely see myself living here longer term at some point.

DNH: How has the transition been? What’s been rewarding or difficult during the process?

Janssens It took me about six months to get fully settled, building relationships with new colleagues, new products. Of course there were some challenges, like getting a local bank account and the typical technicalities that come with changing jobs and moving at the same time, but it’s been a very smooth transition for me.

It’s also been great to get to know new people in the industry and at Virgin Atlantic. I really value their opinions, and working for a different organization has given me a new perspective on Delta and the awareness of our brand internationally. Working at Virgin has been an eye-opener and has made me realize, ‘Oh, maybe I should change my way of looking at some things’. 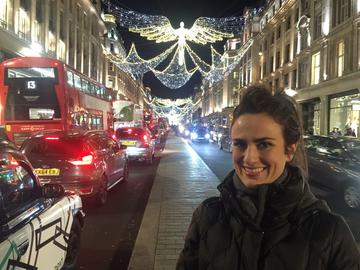 DNH: Living abroad, sometimes one might encounter some communication mishaps. Have you had that experience?

Janssens: Yes! Flemish is my native language, but I’m generally familiar with American English having worked at Delta for many years. Still, there are times when I’m speaking to a local and they say something that just completely baffles me.

Around Christmas time, my team was getting together some presents to deliver to customers, and one of my colleagues asked me to pick up some “baubles.” I thought they were saying “bubbles!” When I asked where the bottles of champagne were, they gave me a confused look and then burst out laughing. It turns out “baubles” are actually ornaments that go on the Christmas tree – I had no idea!

DNH: What advice would you give others starting a talent exchange abroad?

Janssens: You have to keep an open mind about it and realize that not everything will be what you expect. You also have to be prepared to deal with some of the differences in cultures and environments at a new organization and in a different country.

I think for some people, at first, it can be a little lonely not knowing anyone in a new place. For me, home is still relatively close by so I can visit regularly, plus there are opportunities to get to know and spend time with new people. Overall, it’s been an awesome experience, and it’s a great opportunity to explore a new place.