Employees, customers continue to come together for breast cancer cure

With just days left in Breast Cancer Awareness Month, Delta people continue to wear pink uniforms and sell pink products, including pink lemonade and headsets, on board and in Delta Sky Clubs to raise awareness and money for the Breast Cancer Research Foundation. 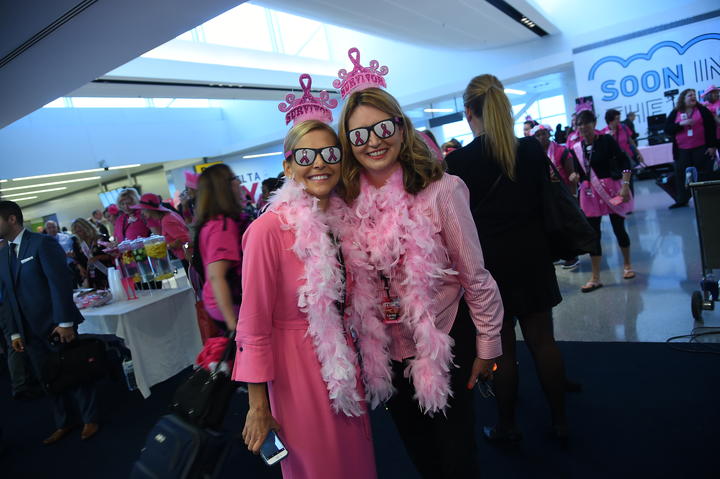 Delta kicked off its month-long campaign to generate awareness and raise funds for BCRF with its 12th annual “Breast Cancer One” employee survivor flight, where the airline’s iconic Pink Plane carried more than 140 employee breast cancer survivors from New York City to Los Angeles. On the flight alone, Delta employees and customers raised more than $20,000 to support the airline’s fundraising campaign.

Since 2005, Delta employees, customers and their friends and families have raised $11 million for BCRF, including last year’s $1.75 million. The collective contributions have funded the vital work of 44 different research projects, ranging from new treatments to better methods of detection, in the pursuit of eradicating breast cancer.

BCRF is the world’s largest private funder of breast cancer research and has been involved in every major breakthrough in tumor biology, genetics, prevention, treatment, survivorship and metastasis. By spending 91 cents of every dollar on research and public awareness, BCRF remains the highest-rated breast cancer organization in the U.S.

Additional information, including how to donate, is available on delta.com/bcrf.