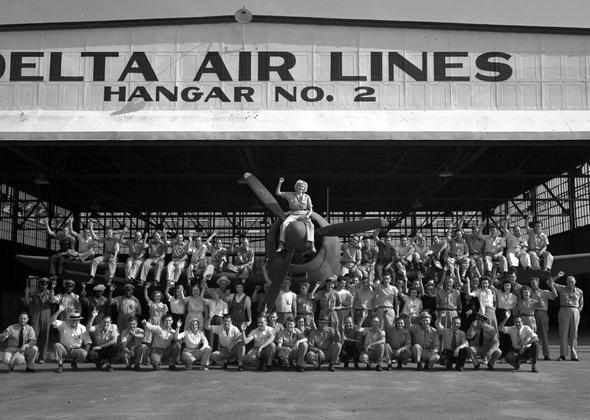 Throughout the company’s history, Delta employees have juggled commitments to both the U.S. military and the airline’s passengers in times of war. In the process, the airline contributed to American war efforts and was shaped by them.

In honor of Veterans Day on Friday, Nov. 11, the Delta Flight Museum compiled key facts and images from the museum’s archives displaying Delta employees’ service to the nation from the airline’s beginnings to the present day. 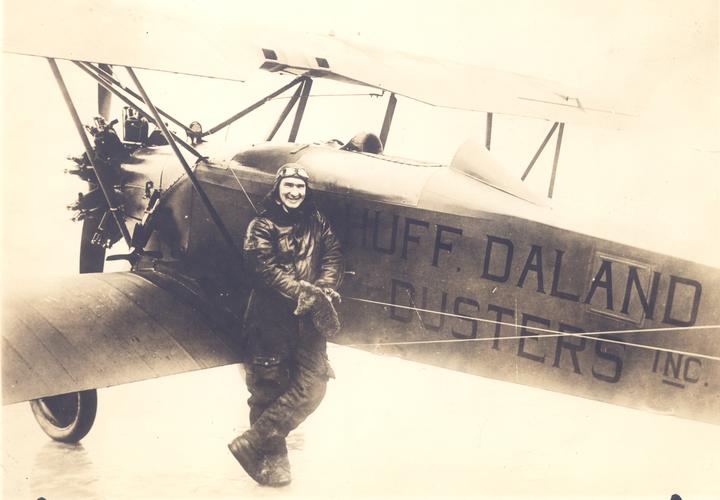 The war accelerated the development of American commercial aviation. The airplane was streamlined – its speed was significantly increased and more powerful engines were developed. Also, the number of experienced pilots and airports multiplied, navigational techniques improved and airmail service began.

Huff Daland Dusters, the predecessor of Delta, came out of this post-war period. With the aid of aircraft and pilots on loan from the Army, researchers at the USDA laboratory in Tallulah, La., perfected aerial crop-dusting. Huff Daland Dusters, the world’s first aerial crop-dusting company, began business in 1925. Well-known pilot Captain Harold R. Harris left the Army to direct flight operations for the new firm. Many of the maintenance personnel and pilots he recruited came from the military.

When Pearl Harbor was attacked on Dec. 7, 1941, many commercial flights were ordered to proceed to the nearest airport, unload passengers and cargo, and await orders. More than half of the U.S. airline fleet, along with pilots and ground personnel, were commandeered for military work. Delta and other carriers were able to carry a greater number of passengers with reduced equipment. Air cargo increased by more than 100 percent in the industry.

Delta's fleet in 1941 consisted of 10 aircraft: five 10-seat Lockheed Electras and five 21-seat Douglas DC-3s. The military requisitioned all of Delta's Electras and one DC-3. Delta operated the four remaining DC-3s on a reduced schedule, carrying passengers on a strict priority basis, according to their importance to the war effort. Planes were full with military or civilians flying on urgent war business.

The 1945 Delta Annual Report stated, “Despite problems arising under war conditions, Delta has been able to maintain good relations with the public, because employee relations have been healthy and all personnel have sought eagerly to advance the business of the company.” 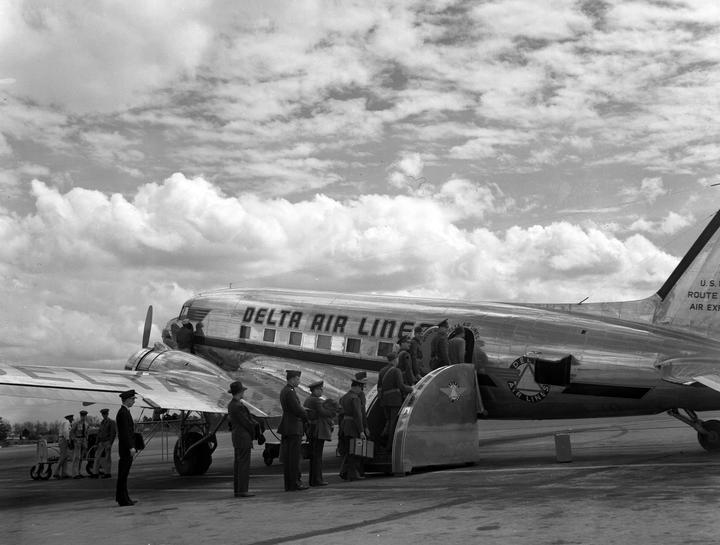 One of Delta’s greatest contributions to the war effort was its aircraft modification program.  Between May 1942 and November 1944, Delta modified 916 aircraft of 14 different types to meet the demands of the war. Delta’s operation, by then in Atlanta, was the last temporary modification center in the country to be closed by the government because of its efficient and rapid work despite material shortages.

According to the Delta Digest, “Our modification boys used to say the government sent their toughest jobs down to us and drew the blue-prints after we had worked out a solution to the problem.” 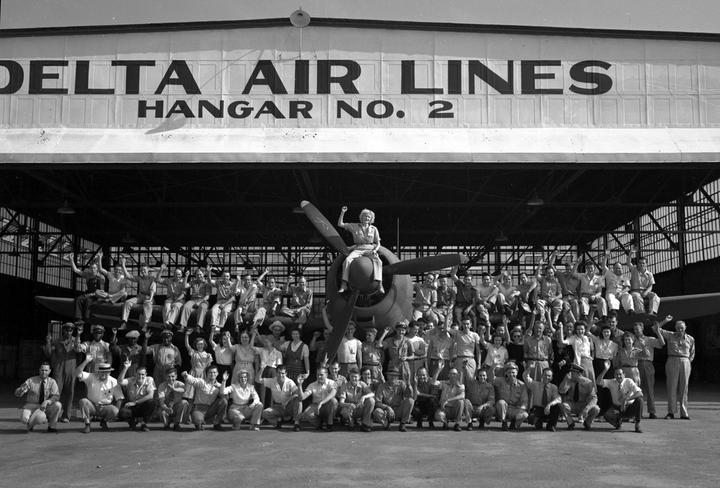 At the height of the war in 1944, 187 Delta employees were in the armed forces. Many of Delta's flight attendants were called to military service based on their nursing experience. To fill vacancies, Delta dropped its requirement that flight attendant applicants must be nurses.

During World War II, Delta hired women to fill traditionally male positions left vacant by the war effort, especially in the traffic, operations, reservations and maintenance departments. By mid-1943, one-third of Delta’s employees were female, compared to less than 10 percent before the war.

Delta employed its first female mechanics in October 1942. Most of the women were graduates of a government apprentice mechanics school.

“When this war is ended, we will find the air industry advanced at least a dozen years almost overnight,” said C. E. Woolman, Delta’s principal founder and first CEO, in 1942.

Reflecting on the war years, the introduction of the post-war Delta and You employee handbook stated, “The war years were a nightmare of long hours, reduced fleets, shortages of personnel, priorities, tripled and quadrupled traffic, plus additional contract work for the Army. But even during the war, the (federal) Civil Aeronautics Board was impressed by Delta's efficiency under the circumstances and authorized a new route from Fort Worth to New Orleans.” 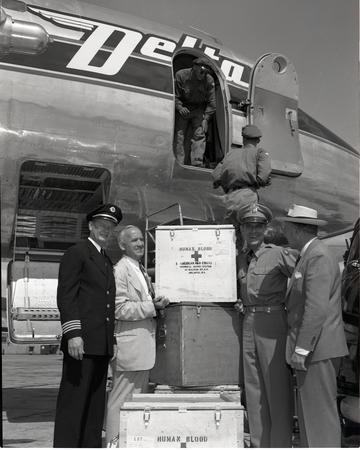 This conflict far from home occurred during a time of growth for Delta. Delta had new routes, airport facilities, ticket offices, faster and bigger aircraft and record numbers of passengers during these years. The merger of Chicago & Southern Air Lines (C&S) in 1953 extended Delta’s service into the Caribbean and to Caracas, Venezuela.

Company planes were occasionally diverted for supply services in the Pacific and employees were periodically called up for military duty. Delta transported blood donated through the American Red Cross to United Nations forces free of charge. Delta operated military charters to training camps within the U.S. Delta also contributed a Douglas DC-4 to the Korean air lift, under lease to Northwest Airlines, carrying military supplies and personnel between Seattle, Alaska, Shemya and Tokyo.

During the United States’ involvement in Vietnam, Delta faced a recession, inflation and the energy crisis. Delta’s beloved Woolman passed away in 1966. Northeast Airlines was merged with Delta in 1972.

As a volunteer project, Delta employees in 1971 opened temporary military lounges in airports at Christmastime for military personnel waiting for flights home. In 1973, Delta’s Military Lounge became a permanent part of the Atlanta airport.

Soldiers serving in Vietnam frequently requested copies of Delta posters depicting their hometowns. The posters were from Delta’s popular 1961-1971 ad campaign. This long-running promotion celebrated the excitement of jet travel and Delta’s “Crown Jewels – the cities that we sell and serve.” 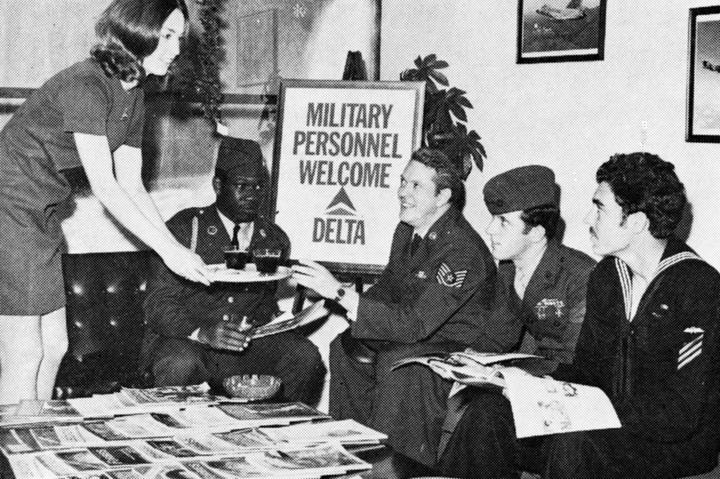 Each year, Delta employees contributed goods such as food, clothing, toys, and soap for Christmas packages to the people of South Vietnam. Packages were distributed by the 13th Army Aviation Battalion – known as the “Delta Battalion” – which operated in the Mekong Delta area in South Vietnam.

Beginning in 1971, Delta pilots vigorously campaigned for relief, assistance and release of American and Allied prisoners of war and those missing in action.

After the collapse of South Vietnam in 1975, hundreds of orphans were airlifted to the U.S.  Many employees in the airline community, including Delta personnel, volunteered to escort children from processing centers to their adoptive parents. Airline employees often used their own money to purchase clothing, toys and food, as well as tickets for older children.

1991 was one of the most difficult years in the history of Delta up to that time. For only the second time in 44 years, the company reported a net loss. In the airline industry, many U.S. carriers suffered heavy losses, defaulted on debt repayments, filed for bankruptcy or were liquidated. During the crisis in the Middle East, jet fuel prices more than doubled in a few weeks. The crisis also caused uncertainty in the U.S. and world economies, which reduced traffic demand, especially in international markets. 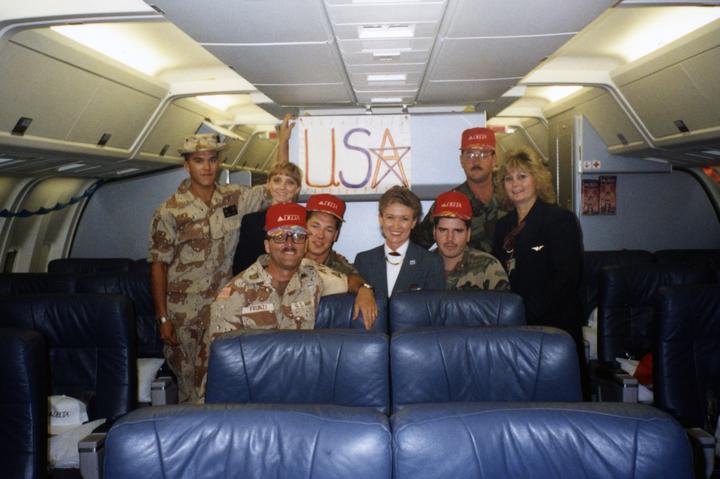 “It all comes down to service, and that’s really the only thing we are in business to do,” said Jim Callison, Delta’s S.V.P. – Corporate Affairs, speaking of Delta's Gulf War contributions. “And the people at Delta Air Lines are interested not only in the service to our customers, but also service to our country.”

Working with the Red Cross, Delta joined American Airlines in donating 300 free tickets on a first-come, first-serve basis to enable family members who did not qualify for Invitational Travel Orders and who were financially unable to purchase tickets. This allowed family members to visit wounded military personnel in medical facilities in the United States as well as attend funeral services.

Delta offered "Welcome Home" fares for all active U.S. military personnel and their immediate family from March 2, 1991, to Sept. 30, 1991. Round-trip fares were 70 percent below normal coach fare to all cities served by Delta.

Delta began offering aircraft maintenance services for military clients in 2001, starting with “nose-to-tail” service for the C-40, a military version of the Boeing 737.

When the U.S. military reactivated CRAF flights in 2003, Delta supplied three aircraft for transporting troops. Delta operated more than 185 missions during Stage 1 in February to June 2003, moving 42,600 troops in and out of the Middle East, more than any other carrier.

Delta employees often recognize military service members in uniform through several initiatives, including publicly thanking members of the military onboard. Delta flight attendants have been recognized for sending journals filled with customer messages to men and women stationed overseas, and for sending care baskets.

Delta is also a longstanding supporter of military support organizations, including the Fisher House Foundation and United Service Organization. Delta supports six military lounges and centers nationwide, including USO of Georgia, USO of Metro New York, Bob Hope USO in Los Angeles and USO Northwest in Seattle, as well as the Freedom Center in Detroit and Armed Service Center of Minneapolis-St. Paul. In addition, through the SkyWish program, millions miles have been donated to provide travel for families of men and women in uniform.

Delta has pledged to hire more veterans by 2020 as part of its participation in the 100,000 Jobs Mission. As part of this commitment, Delta sponsored the 2011 the Gracie Mansion Veterans Day Breakfast hosted by then-Mayor Michael Bloomberg, and the Veterans Day Parade, both held in New York City.

Marie Force is Archives Director at the Delta Flight Museum.