Delta employees across the system continued the annual tradition of “flying” children to the North Pole to spread joy and celebrate the magic of the holiday season. 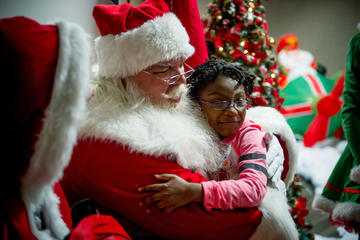 The events, which are led by respective divisions, were held in Atlanta, Boston, Cincinnati, Charlotte, Detroit and Salt Lake City during December. Hundreds of children were invited from a variety of charitable organizations to enjoy a magical night complete with a visit to the North Pole, gifts and a visit from Santa Claus.

Salt Lake City held its Santa Express event on Dec. 5, in partnership with Primary Children’s Hospital and Shriner’s Hospital. More than 190 children and their families, along with approximately 80 employee volunteers representing Airport Customer Service, In-Flight Service, Reservation Sales, Maintenance, Flight Ops and the Delta Community Credit Union, organized and attended the event. During the event, the children were treated to a flight to the North Pole, a visit and photo opportunity with Santa and Mrs. Claus, and a meet-and-greet with Buddy the Elf as well as a food, activity stations, photo booths, and a gift for each child.

“This event is a great opportunity for Delta employees to give back to the community in an amazingly powerful way,” said Brett Rydalch, SLC Field Director. “We never struggle to get volunteers.”

Delta and Children’s Healthcare of Atlanta made holiday magic as the airline flew more than 40 children battling childhood cancer and blood disorders to the North Pole on Dec. 5. Patients from the Aflac Cancer & Blood Disorders Center of Children’s Healthcare of Atlanta arrived in limousines by special police escort to Hartsfield-Jackson Atlanta International Airport, where they boarded Flight 8245 headed to the North Pole. After a quick flight, the children were greeted by elves and Delta employees for a fun gathering where they got to spend time with Santa Claus and, Mrs. Claus.

Team members from Customer Care and Refunds raised more than $6,000 to make it possible for children who have lost a parent in military service to take the third annual Polar Express flight to the “North Pole” from Charlotte on Dec. 5. About 40 “Gold Star Children” and their families were treated to hours of excitement, games, food, presents and a visit with Santa and Mrs. Claus. Once all the children visited with Santa, they boarded the aircraft for the ride. On board, a local In-Flight group sang Christmas carols and served milk and cookies for the children. Partner organizations included TAPS (Tragedy Assistance Program for Survivors) and the USO of Charlotte. Care and Refunds team members joined volunteers from CLT ACS, IFS, DGS, Line Maintenance and Flight Ops to staff the event. 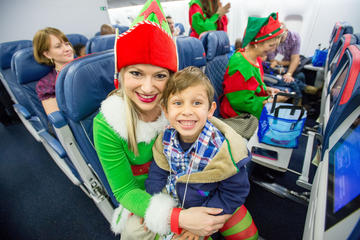 “There is nothing more satisfying than putting a smile on a child’s face and making them happy, especially when they have experienced the tragedy of losing a parent at such a young age,” said Belinda Lopez, Performance Manager –Customer Care. “I’m so happy to be a part of the Polar Express team. Just seeing all these smiles is worth all the time and effort we put into this.”

The Boston team hosted its seventh annual Holiday in the Hangar event, partnering with Make-A-Wish New England. More than 150 children and their family members and 70 volunteers from ACS, IFS, TechOps, Flight Ops and DT, attended the event. The Tower reported seeing Santa’s sleigh arriving and old Saint Nick himself, along with Mrs. Clause and a band of merry volunteer elves, arrived in a specially decorated bag tug. The tug was filled with carts loaded with donated toys from Mattel and Delta-branded snow globes were handed out. The children also enjoyed face painting, games, magicians, bouncy houses, meet-and-greets with Elsa and Anna, and each kid created an ornament for the holiday tree which was placed in the Terminal A lobby.

“The event was a big success due to the hard work of our cross-divisional volunteers who have been planning for the event for months” said Jeff Hollar, BOS Department Manager. “It is so exciting when the doors open to see the kids come flooding in with joy and wonderment in their eyes to see Delta’s hangar turned into a winter wonderland of fun for them.”

The Detroit Fantasy Flight to the North Pole celebrated its 30th anniversary this year, hosting more than 60 children on Dec. 11. The event was held in partnership with six local hospitals including Beaumont –Royal Oak, C.S. Motts Children’s Hospital, Detroit Children’s Hospital, Henry Ford Hospital, Oakwood/Beaumont and St. John’s Children’s Hospital. The children were greeted at the airport by elves, toy soldiers, clowns and a local band playing Christmas music. Employee volunteers transformed the gatehouse and plane into a winter wonderland full of snowflakes and lights. After a quick flight to the North Pole, Santa greeted each child as they deplaned and headed off to a party complete with a magician, face painting, clowns, a castle for Santa and a sack full of toys given to each child. Local ACS and IFS employees organized and staffed the event. 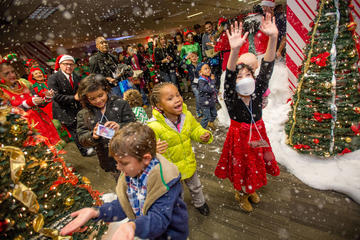 More than 70 employee volunteers, representing various divisions, came together to give children in the Cincinnati area a holiday experience they will never forget. More than 80 children from the Ronald McDonald House and Most Valuable Kids organization attended the 5th annual North Pole Project Fantasy Flight on Dec. 12. The special flight was hosted by elves and reindeer and included the reading of “Twas the Night Before Christmas” by a local news anchor. After landing at the North Pole, the children each got to visit with Santa and Mrs. Claus and were presented with toys, which were donated by CVG Delta employees. The mascots from the Cincinnati Bengals and Reds made their rounds through the crowd, and the smiles on the children’s faces were evidence of the joy that this event brings to these children and their families.

“It is remarkable how the entire station works together to bring these children a holiday that they will never forget,” said Christy Blackburn, Base Manager – IFS. “We do this every holiday season and it is the highlight of my year.”

Delta and its employees give back to the communities it serves during the holidays by partnering with organizations to give local back to local children.