Just before Memorial Day, a fallen hero made it to his final resting place. The Delta Honor Guard escorted the serviceman in a flag-draped casket home to Minnesota on Thursday.​

Navy fireman third class Glaydon Iverson was aboard the U.S.S. Oklahoma during the attack on Pearl Harbor, when the ship capsized after being hit by torpedoes and enemy aircraft. More than 429 U.S. sailors and Marines were trapped below deck, including 24-year-old Iverson.

His remains went unidentified for 75 years, but in March 2017, the U.S. Department of Defense used DNA technology to identify his remains, providing some final closure for his family.

Delta’s Honor Guard, a group of employee volunteers who greet planes that carry the remains of fallen military service men and women, held a somber, dignified ceremony Thursday to honor Iverson’s homecoming at the Minneapolis-St. Paul International Airport, alongside 25 of his family members. The Navy and Fire Department Honor Guards lined the street with American flags, greeting family as they arrived.

“For us on active duty, today is just a reminder that what we’ve signed up is possibility to pay the ultimate sacrifice someday,” said Navy Commanding Officer Capt. Nathaniel Strandquist at the ceremony.

Delta’s Honor Guard has transported service men and women of current conflicts, as well as the repatriated remains of those from foreign conflicts, such as Vietnam War, Korea War, even World War II. The Guard also pays tribute to first responders, firefighters and law enforcement. They ensure that fallen service members and their families are treated with respect and honor when they pass through a Delta facility. 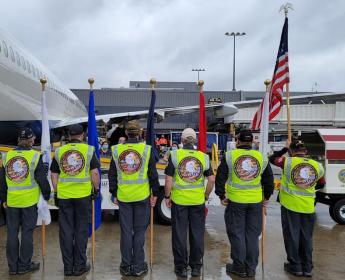 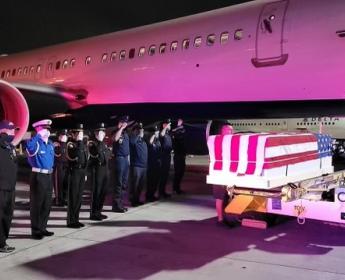