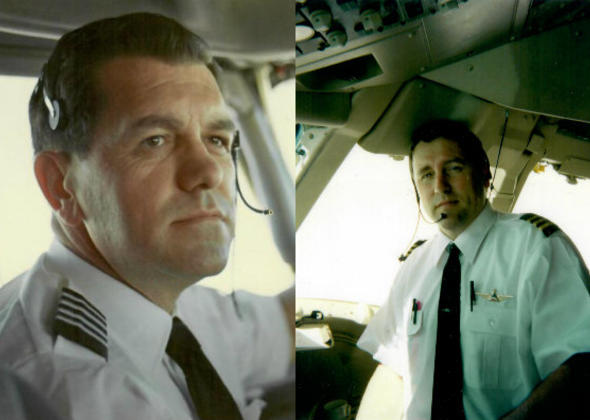 From father to son, a love for flight has passed down for four generations of Captain Kevin Oliver's family, starting at the dawn of commercial aviation. A third-generation pilot, Kevin completed his last flight Wednesday from Paris to Los Angeles on a Boeing 777 as he retired after 32 years with Delta.

"Flying has been in the blood a long time," Kevin said. "I was fortunate to grow up around it, spending hours with my grandfather and dad taking trips." 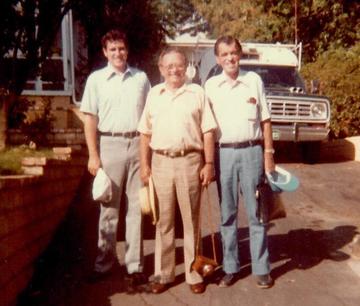 The family business dates back to the early 1930s when Kevin's grandfather, Eugene Anderson Oliver, Sr., worked as an aircraft mechanic for a businessman who traveled frequently on his personal plane. In the pioneering days of aviation, a mechanic would travel with the pilot for safety. Eugene was bitten by the flying bug and became one of the first pilots for a major airline, retiring in 1966 as a Boeing 707 captain.

"After he retired, my grandfather and I made our first trip together at 14, when I started flying seriously," Kevin said.

Eugene's career sparked an interest in his son, Gene Anderson Oliver, Jr. - Kevin's father - who yearned for the skies so much he tried enlisting in the U.S. Air Force at age 17 during World War II. Gene later became a commercial pilot for Western Airlines, which merged with Delta a few years after his retirement in 1983.

Kevin also was hired by Western in 1986. But before he would go on to fly Delta's international routes to China, Australia, Japan, France and Belgium, he earned his private pilot license on his 17th birthday and served in the Air Force for seven years flying T-37 and T-38 fighter jets as an instructor in Arizona.

Like his father and grandfather before him, it was then Kevin's turn to inspire his son, Tyson, currently a pilot for SkyWest Airlines, a Delta Connection carrier.

"There was no question in my mind I wanted to be like my dad," said Tyson. "During career week in first grade, he walked into my class in his full Delta uniform and immediately lit up the room. A few years later, he rented a Cessna and took me up for my first flight. I've shared my love of aviation with him and my family ever since. It's safe to say I have some pretty large shoes to fill and pass on to my future children."

Although Kevin's reached the mandatory age of retirement for commercial airline pilots, he has no plans to quit flying any time soon.

"It's my life," he said. "I've had the privilege to see the Northern Lights a hundred times. I've seen the sun rise and set three times in the same flight. Last week, I took off from Haneda, Japan, and was heading north over Russia. The sun set, but it never got dark. I watched a dusk for five hours."

Kevin's brother, Gary, also followed the family's footsteps, working in Air Traffic Control in Denver for multiple years until his retirement in 2017. His memories include talking to Kevin in flight over the radio. He says aviation was predestined in the Oliver family. 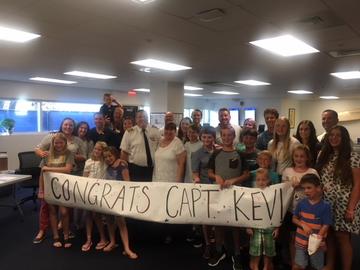 "My family's history goes back to the Azores and the international shipping routes that resupplied ships across the Atlantic. At least three of our relatives were sea captains of commercial shippers. I think our affinity for the Wild Blue Yonder was passed down from these ancestral mariners."

Settling into the next chapter of his life, Kevin is looking forward to spending more time at home in Utah with his 16 grandchildren, one of whom already wants to be a pilot.

"Flying changed my family's life. This career has been an honor. It's remarkable to find the one thing you're meant to do in life, realize you can and be good at it." 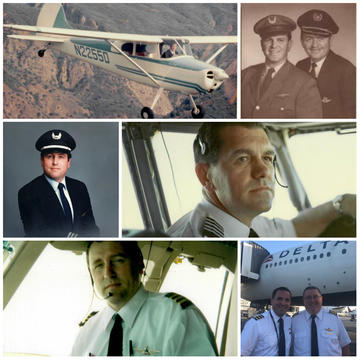 Second body photo: Kevin with his wife, children and grandchildren at his retirement celebration following his last flight