This month, Sky magazine turns its sights on the people and places that make Los Angeles such a fun, creative and compelling city. From the emerging world-class fine arts and fashion scenes to the long-simmering tech industry now reaching full boil, L.A. is more than the epicenter of entertainment. 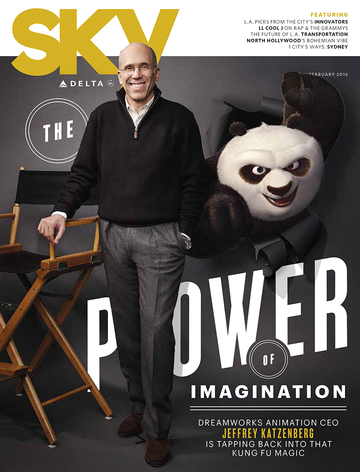 But it’s still that, too – Dreamworks’ CEO Jeffrey Katzenberg, who for decades has been producing movie gold, graces this month’s cover alongside another industry celeb: "Kung Fu Panda’s" Po. The issue shares additional insider perspective about L.A. from some of the city’s bold-faced names, including lifelong Angeleno and avid city booster Casey Wasserman, who’s leading the charge to bring the Summer Olympic and Paralympic Games to L.A. in 2024; Los Angeles mayor Eric Garcetti, whose “Great Streets Initiative” is one of several innovative transportation projects underway throughout the city; L.A. Kings center Jeff Carter, a native Canadian who’s learned to love living by the ocean; and actress Morena Baccarin, who shares some of her favorite haunts along L.A.’s Glendale Boulevard.

The L.A. issue comes as Delta continues to bolster its service at Los Angeles International Airport following the completion of a $229-million upgrade to Terminal 5, including the airline’s first private check-in lounge, Delta ONE at LAX. Beginning June 1, the airline will launch five daily flights from LAX to Denver International Airport, a key route for travelers in L.A. Also this year, Delta will begin operating Boeing 717 aircraft on all Delta West Coast Shuttle flights between L.A. and San Francisco, increase service to both New York-JFK and Seattle to 10 daily flights and add a third daily flight to Boston.

The issue also launches just ahead of Delta’s annual sponsorship of the GRAMMY Awards®, the music industry’s celebrated event that the airline has proudly supported for the past eight years. And that’s just one of the many organizations and partners Delta supports that are vital to the fabric of the city. Add that to Delta’s growing network (the airline operates 160 peak-day departures to nearly 60 destinations worldwide from LAX, nearly double the number of cities served in 2012), and it’s clear that Delta is committed to becoming the airline of choice in one of America’s great cities.