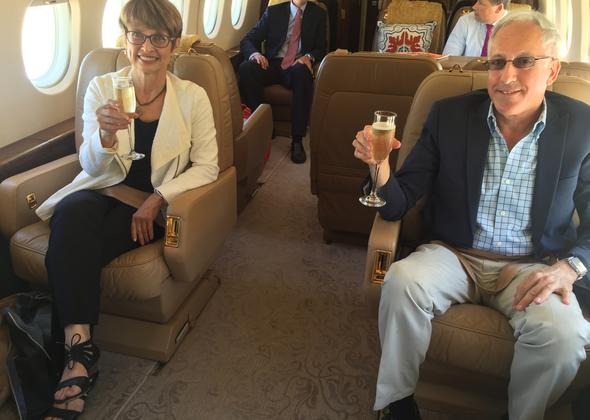 A Cincinnati couple became the first people to receive the ultimate in Delta upgrades: from commercial airplane to a private jet.

Bruce and Jeanette Rogovin are Delta SkyMiles Medallion members and were originally booked on a Delta flight from the Cincinnati airport to Hartsfield-Jackson Atlanta International Airport, until they received an email the night before their Friday flight offering an upgrade to a private plane. 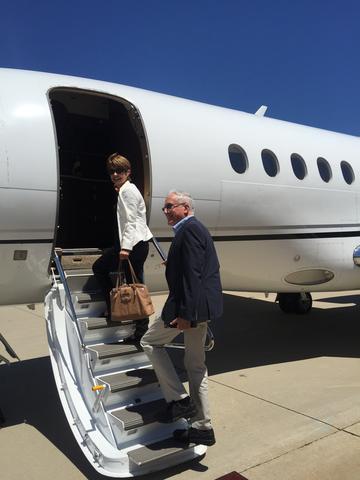 The couple, who were traveling to Atlanta to visit their son, were upgraded to a Falcon 2000, a large cabin jet that seats up to 10 passengers. They even had their own flight attendant, who provided them with complimentary champagne, chocolate-covered strawberries and lunch during the flight.

The couple said they loved the roominess of the private jet.

"I would have to say that it was the most relaxing, enjoyable flight I've ever had," Bruce Rogovin said. "From the lack of lines to the spacious, beautiful cabin, everything was truly enjoyable."

The program - the only one of its kind in the world - is offered by Delta Vacations and allows Medallion status passengers traveling on select Delta commercial flights to upgrade their tickets to travel via Delta Private Jets. Customers are contacted via email and offered the upgrade for an additional fee, which includes transportation to and from the private airport and the main commercial terminal, and complimentary on-board catering.

“Delta Private Jets is proud to operate this innovative program offered by Delta Vacations and Delta Air Lines. As the only Part 135 operator (offering non-scheduled charter flights) in the United States owned by a major airline, we are uniquely able to operate such a program,” said Sneed.

“Delta Private Jets was the first private jet operator to offer the convenience of a Jet Card (see below) and continues to revolutionize the industry with new products such as offering Delta Air Lines Medallion customers elite access to private jet travel.”

Delta Private Jets is a wholly-owned subsidiary of Delta and the fourth-largest private-jet operator in the United States. Delta Private Jets is the only private jet company with a Jet Card that can be used for private and commercial travel. The company operates a diverse fleet of Bombardier, Cessna, Dassault, Gulfstream and Hawker Beechcraft jets. Delta Private Jets holds Wyvern Wingman status and is an ARGUS Platinum Rated Operator, a distinction it has held longer than any other operator in the world. The company operates the Delta Jet Center, as well as a comprehensive maintenance, repair and overhaul facility, at the Greater Cincinnati/Northern Kentucky International Airport.