Flight crew featured as Heroes of the Fortune 500 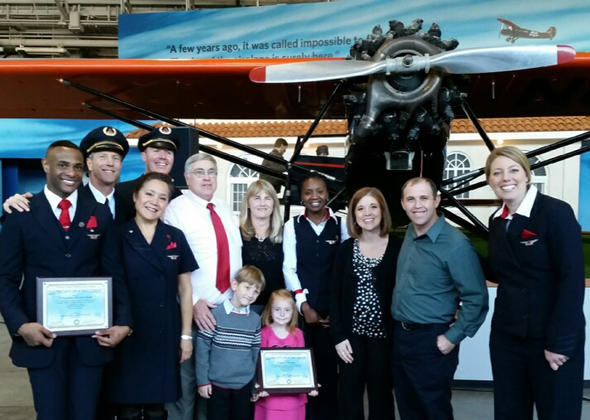 Delta’s flight crew has been highlighted on Fortune's 2015 Heroes of the Fortune 500 list.

On Oct. 29, 2014, the Delta crew was heading to their hotel in Denver when its shuttle driver slumped over the steering wheel, causing the car to swerve to the right on the interstate. Noelle B. grabbed the wheel and Princeton R. pounced to the floor to push the brakes with his hands just moments before the car neared toward the edge of the elevated road.

Once they got the vehicle to a complete stop, the crew members, who included Capt. Patrick W., First Officer Mark N., and flight attendant Crystal W., carried driver Ernie Applegate out of the car and began administering CPR on the side of the road. They took turns giving him compressions until an ambulance arrived.

The crew visited Applegate at the hospital that night to meet his family. He had suffered a severe heart attack. They also learned Applegate’s daughter was about to give birth to his grandson.

“They took the elements of a tragedy and created a miracle,” Applegate said during a ceremony honoring the crew last October. “Because of the efforts of everybody here, I got to hold my third grandchild.”