Delta flights to coastal Florida airports have largely resumed Saturday morning after Hurricane Matthew continued to weaken on its northward track along the contour of the Southeast coast. The now category 1 storm passed just east of Savannah, Ga., during the overnight hours—with winds topping 70 m.p.h.—and is currently just northeast of Charleston, S.C. 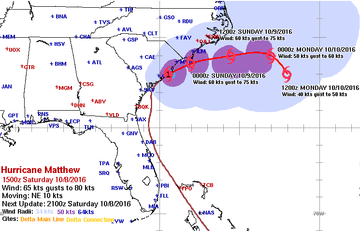 Pending an assessment of facilities, equipment and staffing and based on the storm’s current projected path, Delta anticipates a near-normal operational day Sunday throughout the Southeast with a handful of residual cancellations as a result of Matthew.

The eye of the storm—which has grown to roughly 40 miles across as it weakens—made landfall early Saturday morning near Charleston, S.C. Matthew is expected to follow the coastline to about Wilmington, N.C. before it turns east into the Atlantic around midnight Sunday morning. By late Sunday morning, meteorologists expect it will be 150 to 200 miles off the coast and downgrade to a tropical storm.

Delta issued a severe weather travel waiver to allow customers flying to, from or through the storm’s path to make one-time changes to their reservations. The waiver was expanded to include airports as far north as Raleigh-Durham, N.C. Customers are encouraged to check for real-time flight status on delta.com or via the Fly Delta Mobile App.