Seventy-eight years later, the airline visited Sybil at her retirement home in Acworth, Ga., to celebrate her service to Delta on her 102nd birthday. 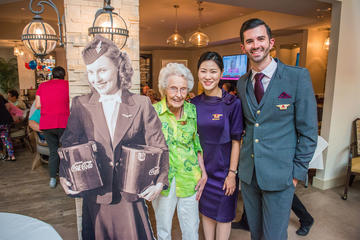 Surrounded by her friends, daughter, Patricia, and her Delta family — including two of the airline’s newest flight attendants — Sybil celebrated a life filled with travel, service and unforgettable memories.

“Flying was special because I was going places,” she said. “When I was 9, I told everyone, ‘I’m going to go all over the world.’ And I did.”

The party kicked off with Allison Ausband, S.V.P. — In-Flight Service, presenting Sybil with an orchid, a Delta tradition started by founder C.E. Woolman, who grew orchids and gave them to employees on special occasions. Allison also pinned Sybil with a new set of flight attendant wings.

“It’s an honor to be here and celebrate Sybil,” Allison said. “People like Sybil made Delta into what it is today. It’s a special place because of her.”

CEO Ed Bastian also filmed a birthday message to Sybil, thanking her “for all you did to put Delta on the map.”

The party included a display of Sybil’s original flight log books, an authentic 1940 stewardess uniform and a life-size cutout of an iconic Delta photo featuring Sybil from a marketing photo shoot in 1940. 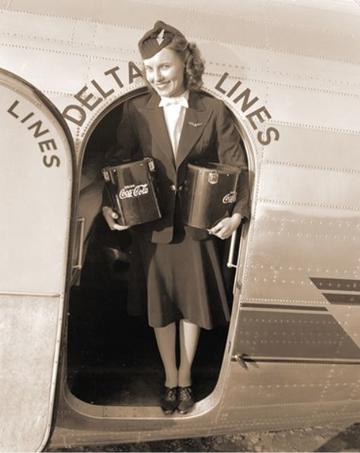 Delta began planning Sybil’s birthday celebration after a chance encounter between a customer and a current flight attendant.

Don Fries, a fellow resident at Sybil’s retirement home, was visiting his son when he brought up Sybil’s former aviation career. His son found her famous photograph on the Delta Flight Museum website and sent it to Fries for confirmation. “I showed it to Sybil and she said, ‘That’s me!’ She had a tear in her eye,” he said.

On his next flight, the son told flight attendant Kevin Jennings, who contacted the Delta team. A phone call revealed that Sybil would be celebrating a monumental birthday in just two weeks. “It was like somebody up there put everybody together at the right time for Sybil,” Fries said.

Sybil flew for Delta from 1940 to 1943, primarily working on the 21-seat DC-3. As a stewardess, she was required to be a registered nurse.

“You felt like a celebrity,” she said. “People would come out to the airport with their children and they would say, ‘Look, that’s the stewardess!’ They even asked for our autographs.”

Her memories of her aviation career include serving in-flight boxed meals of fried chicken, potato salad and a Coke, and giving out chewing gum to passengers due to the lack of pressurization in the cabin.

Sybil recalled that during World War II Delta flew many young pilots back to their bases after they had ferried war planes to North Africa. 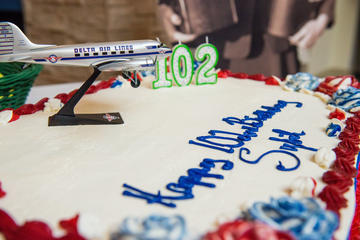 “We called them ‘War Babies’ because they were so young,” she said. “Delta pilots were more seasoned, so I was amazed these young men actually flew huge bombers and fighters. Most of the War Babies slept on flights because they had just come in from North Africa and were exhausted. When they couldn’t sleep, we’d play poker with them in the back of the plane.”

In 1943, Sybil left Delta to join the war effort, eventually being promoted to First Lieutenant.

Three years later, she left the service and married U.S. Army Capt. Wallace Harmon, a former Delta reservations agent who re-joined Delta and spent most of his career as a District Director of Traffic and Sales in Dallas. Their daughter, Peggy, also worked as a Delta flight attendant from 1973 to 2008.

Decades later, Sybil remarked on the two young flight attendants who helped her celebrate her 102 years around the sun.

“It’s a whole new world now,” she said. “I am proud to have paved the way for the next generation.” 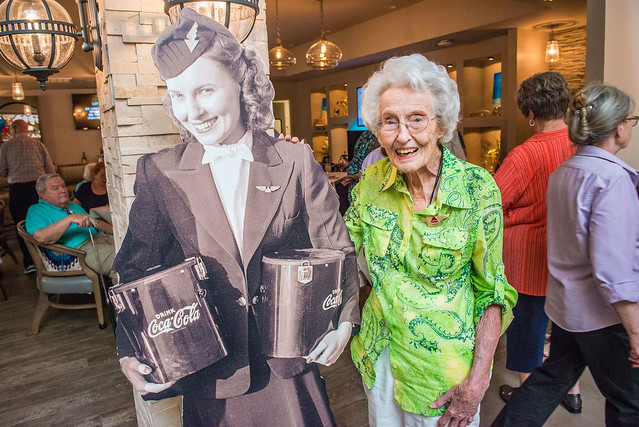