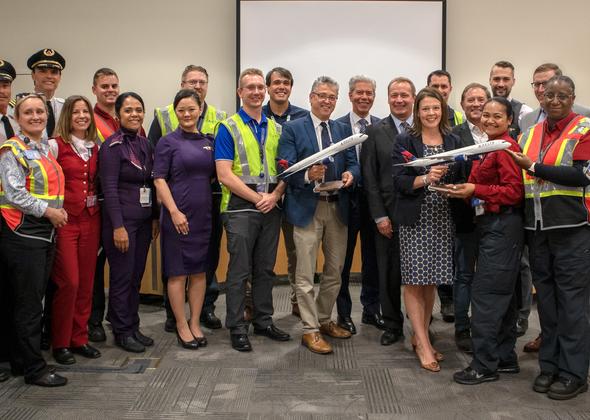 Seattle's stunning summers are its best-kept secret, but customers looking for a short break from its famously overcast and dark days come winter will have more choices as Delta Air Lines expands its service to leisure destinations starting in December 2019.

The winter growth continues a trend for Delta in Seattle, where the airline is growing by five percent this summer, primarily through the use of larger aircraft on existing routes. Service from Seattle to destinations in the West region will expand through additional seats, with peak-day seats to Las Vegas, Los Angeles, Phoenix, San Diego and San Jose up 23 percent on average over summer 2018. Delta also launched its popular Airbus A220 aircraft on the Seattle-San Jose route and will launch additional A220 routes this fall, while the new Airbus A330-900neo, featuring the airline's next-generation Delta One Suite and Delta Premium Select cabin, will debut on Seattle-Shanghai in July and eventually expand to the Seoul-Incheon and Tokyo-Narita routes.

Delta continues to be Seattle's fastest-growing carrier, having added nearly 100 new departures and more than doubled the number of peak-day seats offered since 2014. The airline launched service in April from Seattle to Osaka, its fifth destination in Asia and a significant addition to the Delta and Korean Air trans-Pacific joint venture partnership. The U.S. Department of Transportation recently reached a tentative decision to award Delta five more slots at Tokyo's Haneda Airport, with service expected to begin in summer 2020, pending a final decision by the DOT.

Delta is celebrating the five-year anniversary of its Seattle hub with activities to thank its customers, employees and the community. On Tuesday, June 25, Tony Gonchar, Delta's Vice President – Seattle, joined members of the Port of Seattle commission at a public commission meeting to celebrate the anniversary and presented a Delta aircraft model in a show of partnership.

"The competition we've created has been a great thing for Seattle, with lower fares and higher standards of customer service, on and off our planes," Gonchar said at the Port Commission meeting. "None of this would be possible without the strong support and spirit of partnership we share with the Port of Seattle. Delta is here to stay, and we're just getting started. We look forward to moving ahead together, continuing to ensure competition is strong, and continuing to invest in our local employees, our local partners, and this community."

This month, Delta employees in Seattle have been celebrating by participating in a series of five community engagement events, including a KaBOOM! playground build that was held on June 8 at Puget Sound Elementary; volunteering at the Northwest Harvest Food Bank; a clean-up of the Seattle Art Museum's Olympic Sculpture Park; volunteering at Seattle Pride Fest; and creating care packages for USO Northwest in partnership with Starbucks.

In May, customers were offered a series of celebratory promotions, including $55 fares to select domestic destinations, Delta Comfort+ fares offered at $5 more than Main Cabin, 5,000-mile Award Travel discounts, a status match offer, 5x miles on Lyft rides, and more.

From community engagement, to network growth, to employment growth and profit sharing payouts - Delta's Seattle evolution of the last five years has been significant. See a by-the-numbers look on the Seattle 5-Year Anniversary infographic.