It takes courage, bravery and maybe a little bit of crazy to jump into a frozen lake, but that’s what hundreds of Delta employees did at Lake Calhoun in Minneapolis this past Saturday – all in the name of charity – as part of a grassroots effort.

Delta’s employee team, the Delta Air Lines Frozen Flyers, raised more than $104,000 in the annual Polar Plunge benefiting Special Olympics Minnesota. The team included 244 jumpers from all over the world.

“The weather was nice, and we had a record turnout,” said Eric Johnson, team co-captain and Manager – Human Resources.  “The only problem was the ice thickness.  Since we have had such a warm winter, we had to restrict how many people were on the ice at one time.” 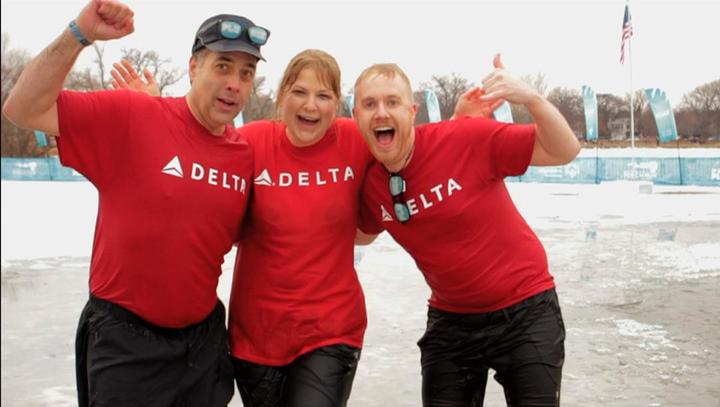 This year, the Delta team had a large contingent from Asia, calling themselves the ‘Pacific Plungers,’ who raised over $15,000 for Special Olympics. The map was well-represented with participants from Detroit, Chicago, Atlanta, Sacramento, Calif., San Diego, St. Lucia, Costa Rica, St. Maarten, Aruba and Jamaica.

“You might think it’s a bucket list item, but that doesn’t begin to tell the story,” said Jeff Hart, team captain and General Manager – Airport Customer Service, MSP.  “I am always surprised by the people who return every year.  They are either committed, crazy or both.”